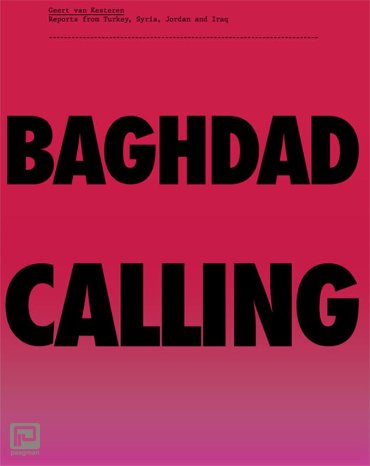 BAGHDAD CALLING is an exceptional photography book. Photojournalist Geert van Kesteren shows how Iraqi refugees are living in Jordan, Syria and Turkey.
Besides these professionally shot images, the book reveals everyday life in the Iraq of 2006 and 2007 through the eyes of Iraqis themselves: a team round Van Kesteren amassed hundreds of photos from the mobile phones and digital cameras of Iraqi citizens that reveal places where journalists dare not tread for reasons of personal safety. These present a sequence of exploding grenades, family parties, ethnic cleansing, dancing in the park, demolished infrastructure, and hope of better times to come.
The combination of professional photos, amateur snapshots and interviews with refugees, giving their first-hand accounts of the horrors that have befallen them, provides a penetrating insight into the situation in which the Iraqi citizens find themselves. Despite some optimistic reports in autumn 2007, the country is still in a state of collapse, into which it descended after the 2003 invasion.
Baghdad Calling is an appeal to those countries of the Western coalition to shoulder their responsibilities and afford the Iraqis some hope of a better future.