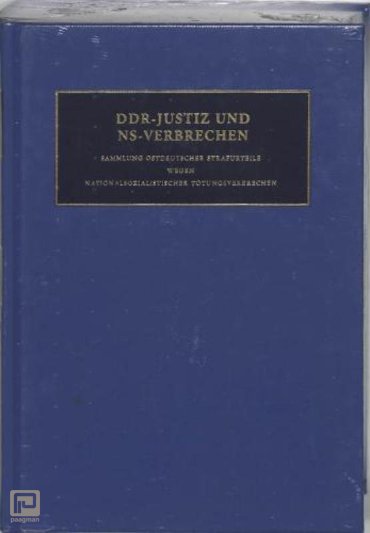 Volume 13 contains the judgments finalized during the first 23 months after the end of the war - from May 1945 until April 1947. (GERMAN)

The first case involving fatalities took place before a court established by a decree of the provincial government of Sachsen: the Volksgericht Sachsen, in September 1945 (Nr.1839). After that there was an extended pause which lasted until April 1946.

There were several reasons for this delay. First of all, there was the closure of all existing German courts after the allied occupation of Germany. When the German judiciary was allowed to resume its activities new courts were set up in various parts of East-Germany which did not conform to the traditional German judicial system. This, despite the fact that, in September 1945, the SMAD had ordered the establishment of a uniform courts' structure modeled after the example of that which existed in the Weimer Republic, with the exception of the Reichsgericht which remained closed. The redress of this situation took until April 1946.

Secondly, there were the organizational difficulties and personnel shortages arising from the dismissal of a substantial numbers of judicial staff members, which were in part interned by the SMAD or taken into investigative custody by the German authorities. Insofar as they had been members of the NSDAP or had played an active role within the Nazi 'special justice' system, they were - a marked contrast with the situation in West-Germany - not allowed to return to judicial service. This led to considerable personnel shortages in the courts, a problem which the East Germans sought to solve by setting up crash courses to train new state attorneys and judges.

Due to all this it lasted until May 1946 before the second post-war NS-trial involving fatalities was staged (Nr.1838). It concerned a denunciation case against the financial employee Puttfarcken, made famous by Gustav Radbruch's essay 'Gesetzliches Unrecht und übergesetzliches Recht'. After that and until April 1947 trials were held, on average, every six days.

With only one exception, the 60 cases tried during the first 23 post-war months all deal with crimes committed in East Germany. The victims consisted primarily of German civilians; about 10% of the cases concerned the killings if Jews and prisoners and the execution of war weary German soldiers during the final phase of the war. The majority of the cases deal with denunciations, whereas in about 11% crimes in detainment centers or so-called phinal phase crimes are concerned.

The criminal prosecution of Nazi crimes during these 23 months shows a tendency similar to that in West-Germany: prosecuted were crimes committed within the jurisdictional territory of the courts which came to their attention through charges brought against certain individuals, by coincidence (Nr.1793), or because certain crimes were still very much present in the 'public mind' due to their seriousness or because they had been committed relatively recent or in local communities. Examples are the so-called Euthanasia-trial (Nr.1832), or the trials concerning crimes committed in the Dresden detainment centers and the forced labor camp of