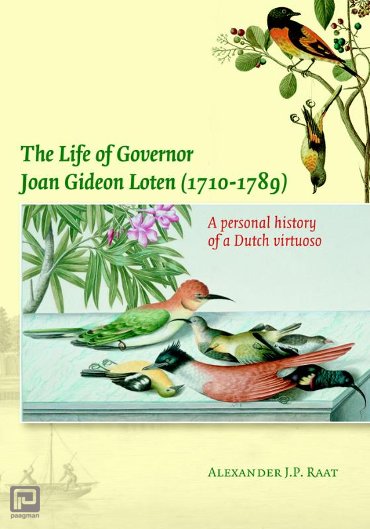 a personal history of a Dutch virtuoso
The Life of Joan Gideon Loten, the 'naturalist Governor of Ceylon', details his personal history and his professional career as a servant of the Dutch East Indies Company. It contains an inventory of his natural history drawings in the London Natural History Museum and Teylers Museum at Haarlem  to this day a valuable treasure of eighteenth-century natural history of Sri Lanka and Indonesia. Lotens documents show us a virtuoso: a connoisseur and dilettante in natural philosophy. They give us a unique glimpse of his character and qualities, but also of his asthmatic sufferings and use of opium. Lotens writings, quoted extensively in this biography, take us from the early-eighteenth-century narrow-minded, provincial Utrecht in the Dutch Republic to the exotic Dutch East Indies and from there to the cosmopolitan London of the latter part of the century.