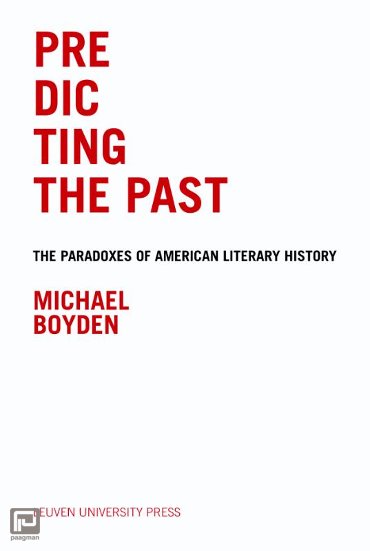 the paradoxes of American literary history
Drawing from the social theories of Niklas Luhmann and Mary Douglas, Predicting the Past advocates a reflexive understanding of the paradoxical institutional dynamic of American literary history as a professional discipline and field of study. Contrary to most disciplinary accounts, Michael Boyden resists the utopian impulse to offer supposedly definitive solutions for the legitimation crises besetting American literature studies by going beyond its inherited racist, classist, and sexist underpinnings. Approaching the existence of the American literary tradition as a typically modern problem generating diverse but functionally equivalent solutions, Boyden argues how its peculiarity does not, as is often supposed, reside in its restrictive exclusivity but rather in its massive inclusivity which drives it to constantly revert to a self-negating beyond perspective. Predicting the Past covers a broad range of both well-known and lesser known literary histories and reference works, from Rufus Griswolds 1847 Prose Writers of America to Sacvan Bercovitchs monumental Cambridge History of American Literature. Throughout, Boyden focuses on particular themes and topics illustrating the selfinduced complexity of American literary history such as the early Anglocentric roots theories of American literature; the debate on contemporary authors in the age of naturalism; the plurilingual ethnocentrism of the pioneer Americanists of the mid-twentieth century; and the genealogical misrepresentation of founding figures such as Jonathan Edwards, Emily Dickinson, and Robert Lowell.