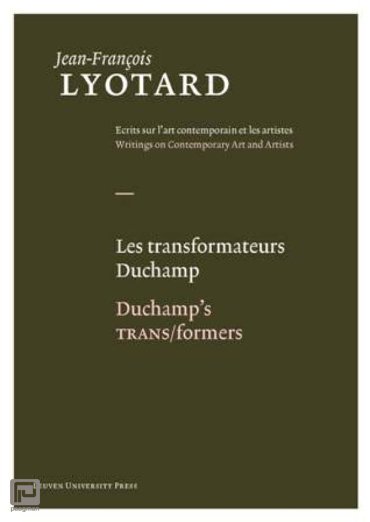 Duchamp's TRANS/formers is the third in a series of five volumes that exhaustively bringstogether the writings of Jean-François Lyotard (1924-1998) on contemporary arts and artists. This collection of essays, written between 1974 and 1977 in the middle of the time of Duchamp's rediscovery in France, was published by Editions Galilée (Paris) in 1977 and in English translation by The Lapis Press (Los Angeles) in 1990. This volume republishes the two versions face to face, including the drawings, diagrams and images of the original edition.
Duchamp's TRANS/formers reconstructs the Large Glass and Given, Duchamp's two major works that glorify the body in its topological conceptuality. The book introduces the question of the advent and the event of art, and invites us furthermore to consider the debt that philosophical commentary owes to the artistic gesture. This essay in philosophical aesthetics also includes reflections on the question of style, on the relation between the notions of transformer and performance, and on recourse to the machine in order to reveal the cunning nature of the machinations in play.