The Negotiations on the Return Directive 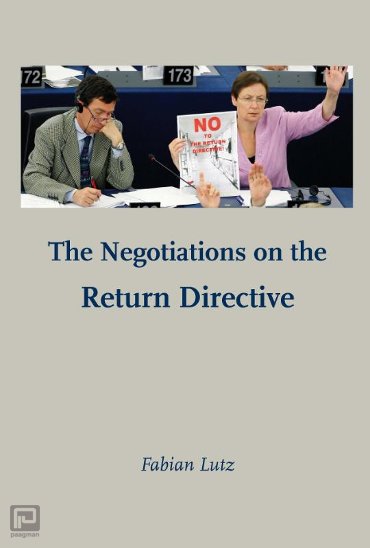 comments and materials
The Return Directive provides the EU with common standards for returning persons staying illegally on their territories. It harmonises the rules in EU Member States on return procedures, legal safeguards, detention, entry bans and compliance with related fundamental rights.
The Return Directive was the first major piece of EU migration legislation adopted jointly by the European Parliament (EP) and Council under co-decision procedure (since 2009: ordinary legislative procedure). Its adoption in 2008 was accompanied by a tide of protest from NGOs, qualifying it as "directive of shame". Why was it possible to find a compromise, in spite of the very divergent positions of EP and Council ? What were they key issues under discussion ? How would the directive look like if it had been adopted without EP involvement ? What lessons can be drawn for the future ? Is it really a "directive of shame"?
This book provides answers to these questions, built upon concrete and verifiable examples and case studies. It is accompanied by an annex, containing relevant background documents, which provide detailed insight into the development of the text during the negotiations.
The author: Dr. Fabian Lutz MSc. is working at the European Commission and accompanied as responsible policy officer the preparation of the Commission proposal and the subsequent negotiations of the Return Directive from 2004-2008.