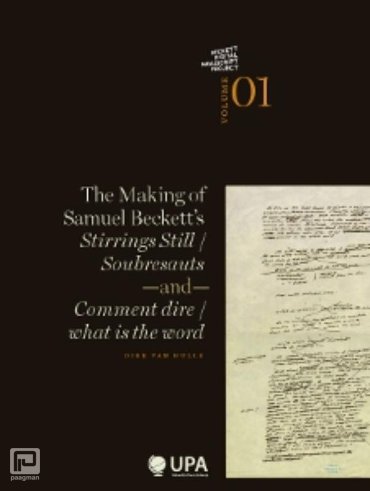 This volume is part of the Beckett Digital Manuscript Project (BDMP), a collaboration between the Centre for Manuscript Genetics (University of Antwerp), the Beckett International Foundation (University of Reading) and the Harry Ransom Humanities Research Center (University of Texas at Austin), with the support of the Estate of Samuel Beckett.
The BDMP (www.beckettarchive.org) digitally reunites the dispersed manuscripts of Samuel Becketts works and facilitates their examination. The project consists of two parts:
a digital archive of Becketts a manuscripts, with facsimiles and transcriptions, organized in modules;
b a series of print volumes, analyzing the genesis of Becketts works.
This first volume of the BDMP studies Becketts last works: Stirrings Still / Soubresauts and Comment dire / what is the word. It examines the notes, manuscripts, typescripts and other writing traces and reconstructs the dynamics of the composition process on the basis of this material. The volume also provides what the BDMP Committee on Scholarly Editions refers to as a textual essay, containing a statement of the editorial principles and practical methods of the BDMP.