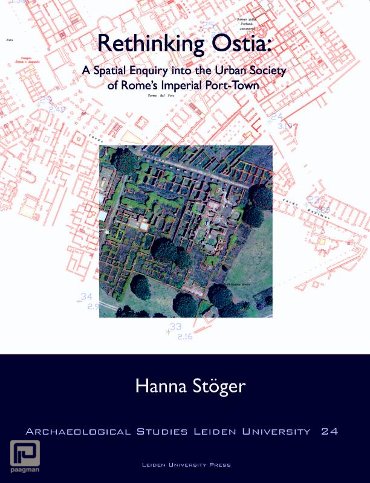 a spatial enquiry into the urban society of Rome's imperial Port-Town
'Rethinking Ostia' presents an archaeological and spatial approach to Roman urbanism, focused on Rome's port city. It takes the reader along the route of a 'spatial investigation', offering a fresh look and detailed insights into the past society and the built environment of this port town. Following a scaled approach, the book examines different aspects of Ostia's urban landscape, applying Space Syntax's methods for spatial analysis to the urban neighbourhood of one city block - Insula IV ii, selected buildings (Ostia's guild seats), and the entire street system. All through the book a 'Space First' policy has been followed, combining archaeological research with today's insights into urban planning.

The heart of this scalar approach is the complete re-working of the archaeological evidence and its interpretative potential for the city block, Insula IV ii. This neighbourhood enjoys an excellent location and boasts a striking variety of buildings including the well-known Terme del Faro, the Caseggiato dell'Ercole, and the Caupona del Pavone, but till now has not been studied in its entirety and within its own social and spatial context. Through a careful reconstruction of the Insula's development over the first three centuries AD, the work fills a lacuna - but more importantly it reveals the way everyday life was structured in the city, and how this evolved over time in response to internal and external influences on the lives of its inhabitants. 'Rethinking Ostia' draws upon archaeological data and extensive spatial analyses, both carefully documented and illustrated. The findings highlight the active role of space in structuring social activity in the ancient city.