Always Something New to Discover : Menahem Pressler and the Beaux Arts Trio 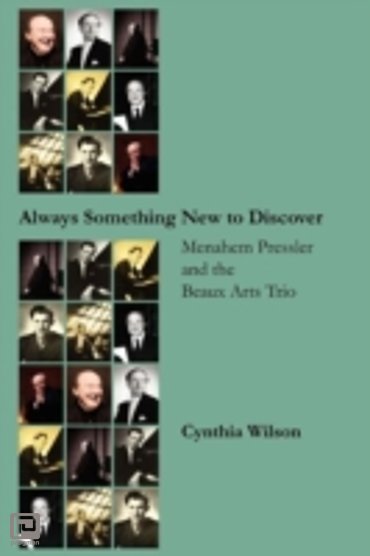 Menahem Pressler and the Beaux Arts TrioGerman born pianist Menahem Pressler (1923) was forced to flee Nazi terror to Israel. He quickly attained international fame in 1946 by winning the Debussy Competition in San Francisco and performing his d but with Eugene Ormandy and The Philadelphia Orchestra. Ultimately emigrating to the United States, Pressler teaches at the Jacobs School of Music of Indiana University where he holds an endowed chair as Distinguished Professor. As founding member of the Beaux Arts Trio, he alone survived the ensemble's changes in membership during its unprecedented 53 year history. 'Setting the standard' for piano trio performance, the Beaux Arts Trio elevated the ensemble type to a par with the string quartet in over seven thousand performances, hundreds of award winning recordings and extensive broadcasts.Famed for his musicality and equally admired for his way with words, communicator Menahem Pressler is captured here, an inspiration to colleagues, students and his international public. In Always Something New to Discover, Pressler's biography, esthetics, pianism and dedication to music are gathered in texts enriched with oral history as generously shared by Pressler and his intimates. 'I am as hungry now making my music as when I was young!' With as yet no retirement in sight, Menahem Pressler continues his musical journey with an undiminished schedule and a full studio of international students, all in blissful service of the music he loves. Originally from Boston, Cynthia Wilson (1953) was educated at Concord Academy in Massachusetts and Sarah Lawrence College in New York before following her passion for early music to Amsterdam. After a decade of concertizing she held a number of management positions in the Dutch music world. In 2006, she founded wwclassics to pursue a wider range of artistic activities.