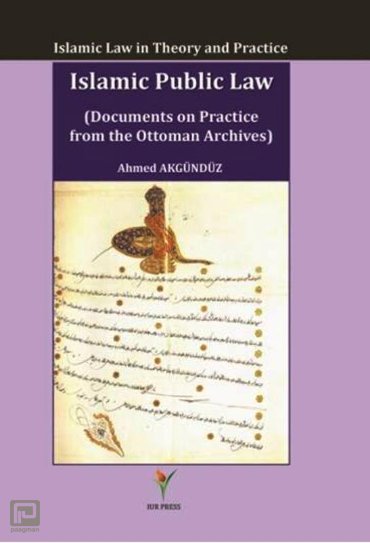 The fields of especially Islamic constitutional law, administrative law, financial law, ta'zir penalties, and arrangements concerning military law based on the restricted legislative authority vested by Shari'ah rules and those jurisprudential decrees based on secondary sources like customs and traditions and the public good (maslahah) all fell under what was variously called public law, al-siyasah al-shar'iyyah (Shari'ah policy), qanun (legal code), qanunnamah, 'orfi huquq etc. Since these laws could not go beyond Shari'ah principles either, at least in theory, they should not be regarded as a legal system outside of Islamic law.

But Islamic penal law, financial law, trial law, and international law depend mostly on rules that are based directly on the Qur'an and the Sunnah and codified in books of fiqh (Islamic law) called Shari'ah rules, Shar'-i sharif, or Shari'ah law. Such rules formed 85% of the legal system.
In this book, we will focus on some controversial problems in the Muslim world today, such as the form of government in Islamic law and the relation between Islam and democracy. Islamic law does not stipulate a certain method of state government; nonetheless, we may say that the principles it decrees and its concept of sovereignty suggest a religious republic. As a matter of fact, Hulafa al-Rashidun (the Rightly Guided Caliphs), were both caliphs and religious republican presidents.
We could say that this book has three main characteristics.

i) We have tried to base our explanations directly on the primary Islamic law sources. For example, after reading some articles on the caliphate or timar system in articles or books by some Western scholars and even by some Muslim scholars, one might conclude that there are different views on these subjects among Muslim scholars. This is not true: Muslisms have agreed on the basic rules on legal subjects, but there are some conflicts regarding nuances and interpretations. If one reads works by Imam Gazzali, Ibn Taymiyyah, al-Mawardi, and al-Farra', one will not find any disagreement on the main rules, but there are some different interpretations of some concepts. We have tried to discover where they agreed and we have sometimes pointed to where they differed.

ii) We have researched practices of Islamic law, especially legal documents in the Ottoman archives. For example, we explain hadd-i sariqa but also mention some legal articles from the Ottoman legal codes (qanunnames) and some Shari'ah court decisions like legal decrees (i'lamat-i shar'iyyah). It is well known that nobody can understand any legal system without implementing and practicing it. That also holds for Islamic law because theory alone does not yield a complete understanding of Shari'ah rules.

iii) We have worked hard to correct some misconceptions and misunderstandings about Islamic law. That is why we appeal to the primary sources. For example, some scholars claim that the Hanafi jurist Imam Sarahsi did not accept the idea of punishment for apostasy. We have studied his work al-Mabsut and found this claim to be unfounded. The comparison between timar and fief is another example because the timar system is different from the fief system. Some scholars confuse the concept of sovereignty and governance. The Islamic state is not a theocratic state in the sense in which Europeans understand the term.