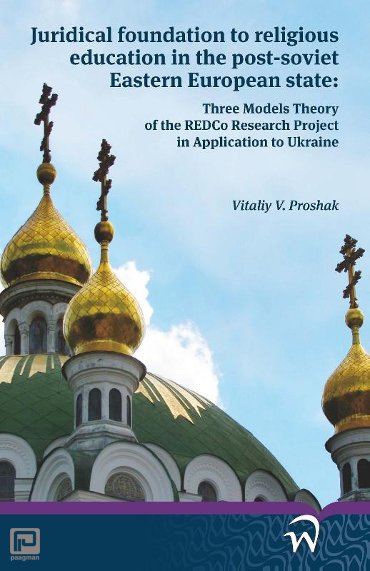 three models theory of the REDCo research project in application to Ukraine
In this book, written within the frameworks of the program Christianity & Society, Tilburg School of Catholic Theology, Tilburg University, an attempt has been made to investigate the existing juridical foundation to religious education in an Eastern European state of the post-Soviet Eastern Block for the
purpose of promotion the democratic notion of religious tolerance and the development of a culture of living together in the multicultural and polyconfessional society of Ukraine. The main research focus of this project is on the juridical foundation to religious education in Ukraine as is presented in the national juristic canons and its interpretation in the broader European spectrum of religious education on the example of the three model theory of the REDCo research project. For this purpose the following juridical constitutional and administrative/ public laws of Ukraine were considered: Constitution of Ukraine and the Law of Ukraine On Education.
Vitaliy V. Proshak is a guest researcher in Multicultural and Religious Education at the Department of Religious Studies and Theology, Faculty of Humanities, Utrecht University. He holds (an equivalent of) BA degree in Biblical Studies and Church Ministry from Zaporozhye Bible College and Seminary, Ukraine, MDiv and MET degrees from Tyndale Theological Seminary, Badhoevedorp and MA Christianity and Society from Tilburg School of Catholic Theology at Tilburg University.