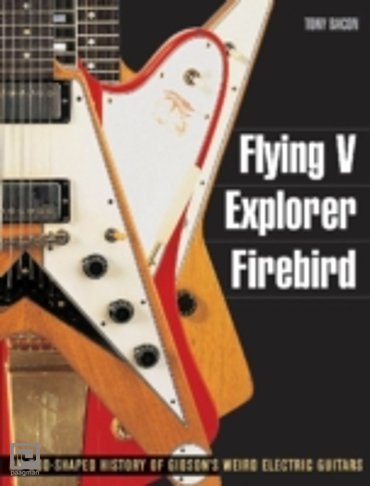 Until the launch of the Flying V and Explorer in 1958, electric guitars were supposed to look like guitars. Suddenly, Gibson turned conventional design upside down, almost literally, by using straight lines and angular body shapes, changing the way electrics could look and, in the process, creating a set of rare future collectables. "Flying V, Explorer, Firebird" tells the story of those first peculiar instruments and goes on to describe Gibson's second attempt at non-standard designs with the Firebird of the early 60s.

The book shows how most of these were a commercial failure at first and goes on to detail the influence of the designs on guitar-makers such as Hamer, Jackson, Dean, Ibanez, and BC Rich, all of whom embraced Gibson's original weird-is-good design ethic. In parallel with the story of the makers is an absorbing account of the players who discovered these odd-shaped instruments, including Zakk Wylde (Black Label Society), Edge (U2), and Rick Nielsen (Cheap Trick). Interviews with players and makers illuminate the story of this fascinating assortment of electric guitar innovations, alongside specially commissioned images of every key model and brand and an enviable collection of guitar memorabilia, plus a gallery of leading guitarists photographed in action with their instruments.

If it's weird and has strings, it's in "Flying V, Explorer, Firebird".