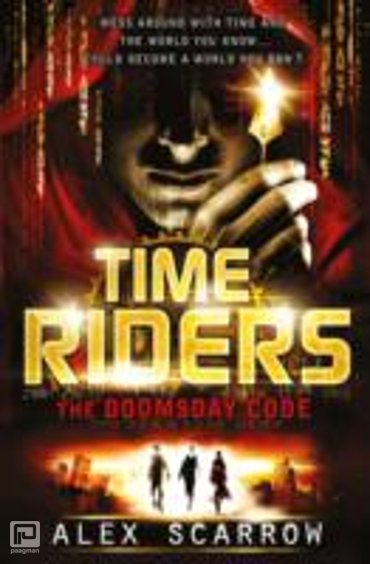 Sal Vikram should have died in a fire in 2029. Yet moments before death, someone mysteriously appeared and said, 'Take my hand ...' But all three have been given a second chance - to work for an agency that no one knows exists. Its purpose: to prevent time travel destroying history...In 1993 British computer hacker Adam Lewis finds his name in a coded manuscript that is almost one thousand years old.

How did Adam's name get in there ...and why? Confronted by Adam in 2001, the TimeRiders travel back to Sherwood Forest in 1193 to discover the origins of the ancient message. But when a strange hooded man appears interested in the same thing, they begin to wonder what terrible threat this cryptic link from the past holds for the future...Alex Scarrow used to be a rock guitarist, then he became a graphic artist, then he decided to be a computer games designer. Finally, he grew up and became an author.

He has written a number of successful thrillers and several screenplays, but it's YA fiction that has allowed him to really have fun with the ideas and concepts he was playing around with when designing games. He lives in Norwich with his son, Jacob, his wife, Frances, and two very fat rats. The TimeRiders series: TimeRiders; Day of the Predator; The Doomsday Code; The Eternal War; Gates of Rome; City of Shadows; The Pirate Kings Alex's thrillers for adults: A Thousand Suns; Last Light; october Skies; Afterlight; and, The Candle Man.