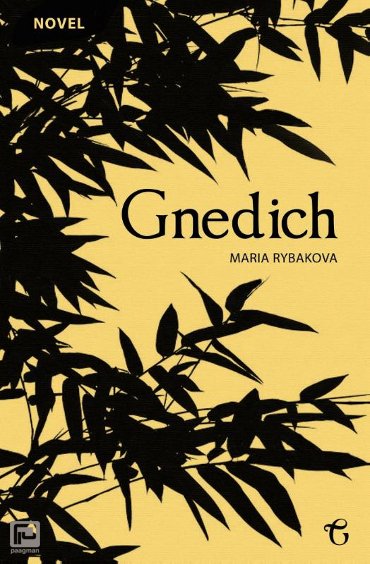 Maria Rybakova's Gnedich captures the reader's attention in its first stanzas with a striking allusion to Homeric Greece: "The rage that killed so many/the wretched rage of Achilles/who knew that he would perish/ that he would perish young. This is a novel-in-verse about the first Russian translator of the Iliad, the romantic poet and librarian Nikolai Gnedich (1784-1833). Since Gnedich spent almost his entire life translating Homer's epic poem, Maria Rybakova has chosen verse as the most appropriate stylistic means in recreating his life. To the English-speaking world, this genre of poetic biography is best exemplified by Ruth Padel's Darwin - A Life in Poems.

Like the Iliad itself, the novel consists of twelve Songs or Cantos, and covers the life of Gnedich from his childhood to his death. It depicts the lives of Gnedich and his best friend, the poet Batyushkov, who is slowly losing his sanity, and incorporates motifs from their poetry, from Homer's epics, and from Greek mythology, as well as magnificent images of imperial Russia and the Homeric world. The space of the novel covers snowy Russian villages, aristocratic St. Petersburg salons, magnificent Italian landscapes, and the austere Greece of Homer's heroes.

Rybakova conjures a fittingly romantic vision of the dramatic lives of Gnedich and his best friend. A major part of the novel is the moving correspondence between the two poets. Philosophical reflections on the fate of the individual are intertwined with poignant stanzas devoted to the great but unhappy love to the tragic actress Ekaterina Semyonova that consumed Gnedich. The novel culminates in Batyushkov's final breakdown in the lunatic asylum and Gnedich's ruminations on Russia's tragic future fate.

The poetic language of Gnedich is refined: it combines the clarity of Rybakova's syllabic verses and the sophistication of her metaphors with distinct, novelistic depictions of certain landscapes, people, and their interactions.

The novel is spectacularly designed: Rybakova's style resembles a movie projection with stop-cards at the key moments in Gnedich's life, his long conversations with his friend, and particular striking sceneries. It creates a novelistic effect on the tale about Gnedich's life, spanning over twenty years. The narrative is often interrupted by streams of consciousness and reminiscence by its main heroes. At the same time, it continues the traditions of Russian classic literature with its attention to detail and the psychology of the characters.

A significant part of the novel is dedicated to the description of Gnedich's friendship with Konstantin Batyushkov, a talented poet of the Pushkin epoch. Gnedich, disfigured by a childhood disease, was a librarian at the Imperial Library in St. Petersburg and became famous through his translation of theIlliad. Batyushkov, an officer of the Russian Imperial court who participated in military campaigns, as well as one of the best poets of the beginning of the 19th century, went through deep crisis and mental illness. The friendship between the two becomes one of the themes within the novel.

Rybakova builds the novel-in-verse's plot around Gnedich's translation of the Illiad into Russian. The narrative progresses from the adult Gnedich's recollection of his childhood in a small country estate in Ukraine in the first Song, his illness and discovery of the magnificent Greek epic about the siege of the Troy that changed his life forever, to the completion of his work on his translation as a final victory over his life's circumstances. The titanic work on the translation continued for almost twenty-two years (1807-29).

In some sense, Gnedich is a novel about a translator and his translation of the Illiad, shown by how the imaginary Homeric world constantly intertwines with Gnedich's thoughts. Rybakova portrays an unforgettable image of a translator: "translator,/the winds from the North and the West blow upon you,/ your thoughts have just flown to Thrace,/but now waves carry you/like a goddess on a shell/to the shore of a paper sea,/and no one recognizes you." Gnedich's inner world is intense and clouded by constant melancholy; motifs from the Iliad invade his thoughts and transform his reality. In his imagination, even the Greek letters become meaningful symbols: "alpha, beta and gamma, delta, epsilon, zeta, eta ... phi, like a lady's exclamation, chi, like an official's chuckle, psi, the strangest of letters, and omega, the last one, which contains it all." Trying to fall asleep during long sleepless nights, Gnedich recollects the names of the heroines of the Iliad: "Agadame, Agaue (the Nereid, it seems), Aglaea, Aegialeia, Aitha (no, Aitha must be a horse), Alcyona - no, perhaps she's a seagull, Althea and Amatheia... and all of them have Semyonova's face." The translation becomes the major influence on Gnedich's life, capable of transforming the world around him.

Rybakova also masterfully explores the literary and social life during the times of Pushkin, and includes scenes of folk life and beliefs in 19th century Russia.

Starting from the first Song, the author narrates Gnedich's life through his work on the translation of the Illiad. In the text, Gnedich recollects the events from his childhood: after the illness, he became blind in one eye, and it influenced his life and thoughts profoundly. He delved into his inner world, and his alter ego - a translator of Greek - invisibly participates in events of the Illiad.

A significant part of the text of the Song is the emotionally touching friendship of the two poets and their numerous conversations with Batyushkov. There also appears the unforgettable character of the actress Ekaterina Semeyonova, the famous belle of the St. Petersburg salons and the recipient of the poet's unrequited love. It is also an important plot line in the novel.

The appearance of a new personage, the maid Elena, in the third Song brings comic nuance into the text. Rybakova builds this character as a stark contrast to Homer's Helen and her beauty. Elena, a simple peasant, is lacking in attractiveness, but is one of the most tragic figures in the novel-in-verse. Elena's love of Gnedich is devoid of any hope but is immense and beautiful. She spends hours in Gnedich's house cleaning and dusting, and noticing any changes in the translator's life, despite being unable to see him in person or to understand him: "Who is he, / the one you think about /and don't know, /is he a man?/is he a master?/is he God?"

The novel progresses through Gnedich's trip to visit his friend in the countryside estate of Khantonovo in a Russian province in the fourth Song. It describes Gnedich's travel notes and scenes from Russian provincial villages. This Song is extremely important for understanding Batyushkov's character as a mixture of his almost childish naiveté and brave spirit with his progressing illness. The narrative develops into a dramatic discourse on the fate of the individual in a hostile world during the friends' conversation.

Gnedich's return to St. Petersburg, his life there and his work at the Imperial library, the crisis in his relationship with Semyonova, and his all-consuming work on the translation constitute the content of the next few Songs. They are intertwined with reminiscences of ancient Greece and fragments of the correspondence with Batyushkov. The majestic panorama of imperial St. Petersburg as well as scenes from Batyushkov's trip to Italy is an exquisite background to the thoughts of the hero on his life and his destiny. Batyushkov's trip to Italy, as described in the ninth Song, gives an insight into both poets' attitude on the eternal questions: "I created an Italy for myself, / beautiful as a mother, so that she would embrace me in her arms. / But even here it is lonely."

In next Song, Elena discovers the manuscript of a youthful work by Gnedich, Don Corrado, written in imitation of Gothic fiction. It provides another comic touch to the text as it describes the content of the dramatic Gothic story through the eyes of simple Russian peasants. Rybakova skillfully uses changes of register in the descriptions of the peasant lingo.

The narrative culminates in Batyushkov's final breakdown and his placement into the lunatic asylum in Sonnenstein in Germany. One of the most dramatic moments of the novel is his prophecy on the future events in Sonnenstein that actually happened during WWII, when "angels with ice-cold eyes," made "half of snow and half of fire," come and destroy the clinic. The Nazi killing of the patients at the clinic more than a hundred years later is the emotional culmination of the novel.

The final Song describes Gnedich's last period of his life. The translation of The Iliad was over in 1829, and Gnedich felt that his life's purpose was fulfilled. In the book, Gnedich visits the estate of his friend Olenin and is seen through the eyes of its residents. Gnedich sums up his life and tries to find meaning in it. In a moment of bitter insight, he realizes that his life devoted to books was lacking in happiness. But there is also one of the author's most powerful statements about the constant presence of happiness in life. In the powerful circle of life where only beauty seems to attract attention, the hero has just passed on the great feeling of his non-educated and non-attractive maid Elena. Rybakova does not contemplate on it but allows readers to think about the implications. Happiness has different dimensions and the final verse describes the triumph of life.