You've got to have the guts 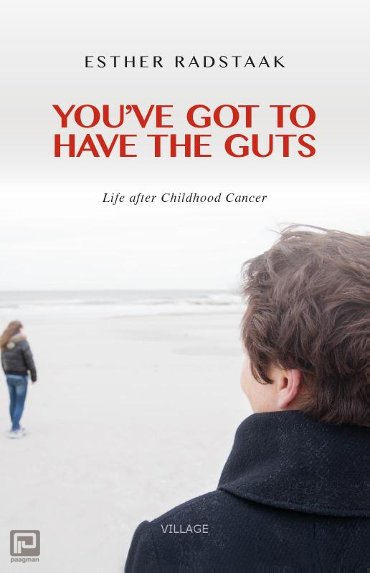 life after childhood cancer
The autobiographical book You've Got to Have the Guts is the moving account of a quest for happiness.
Esther Radstaak-Brookman (1967) was diagnosed with a germ cell tumor at the age of twelve. After two years of serious illness she healed.
These days Esther is a pharmacist assistant, married and has a healthy daughter. When her daughter was almost twelve, all the traumatic experiences that Esther had to endure when she was young emerged more vividly than ever. Due to all the emotional trauma she lost grip on life and alienated herself. As a last resort she looked for professional help. In a long-term psychotherapy with dozens of EMDR (Eye Movement Desensitization and Reprocessing) sessions, she finally rediscovered herself.
This book will help parents deal with their grief and emotions. Doctors and nurses have the opportunity to see themselves through the eyes of a child. But the most valuable is that people with similar traumatic experiences can draw courage from Esther's final victory.
Esther Radstaak is married, has one daughter and works as a pharmacist assistant. She has been involved as a volunteer with the Association of Parents, Children and Cancer, participates in scientific research into the late effects of childhood cancer and is frequently in the news.
'A confrontational, but also uplifting book. It gives a good insight in the deep valleys cancer can cause in a lifetime. Highly recommended!'
Prof.Dr. H. Vanderwiel