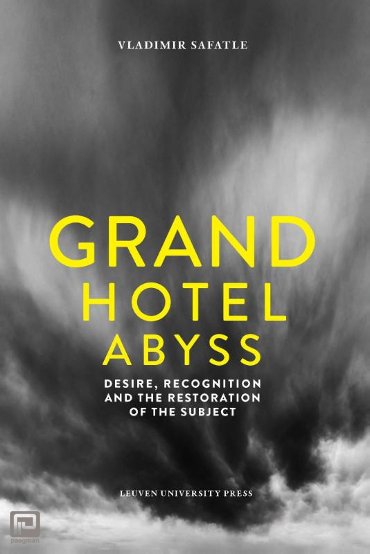 desire, recognition and the restoration of the subject
Originally published in Portuguese as 'Grande Hotel Abismo'.
In the last two decades recognition - arguably one of the most central notions of the dialectical tradition since Hegel - has once again become a crucial philosophical theme. Nevertheless, the new theories of recognition fail to provide room for reflection on transformation processes in politics and morality.
This book aims to recover the disruptive nature of the dialectical tradition by means of a severe critique of the dominance of an anthropology of the individual identity in contemporary theories of recognition. This critique implies a thorough rethinking of basic concepts such as desire, negativity, will and drive, with Hegel, Lacan and Adorno being our main guides.
The Marxist philosopher György Lukács said that the Frankfurt School (Horkheimer, Adorno, etc.) left us with nothing but negativity towards the state of the world. Their work failed to open up a concrete possibility of practical engagement in this world. All too eager to describe the impasses of reason, the Frankfurt philosphers remained trapped in a metaphorical Grand Hotel Abyss (Grand Hotel Abgrund). It was as living and being guardian of lettered civilization in a beautiful and melancholy grand hotel, of which the balconies face a gaping abyss.
But perhaps in this way Lukács gave - and no doubt without realizing it himself - a perfect definition of contemporary philosophy, namely to confront chaos, to peer into what appears to a certain rationality as an abyss and to feel good about it. Touching Hegelian dialectics, critical theory and psychoanalysis, Grand Hotel Abyss gives a new meaning to the notion of negativity as the first essential step for rethinking political and moral engagement.