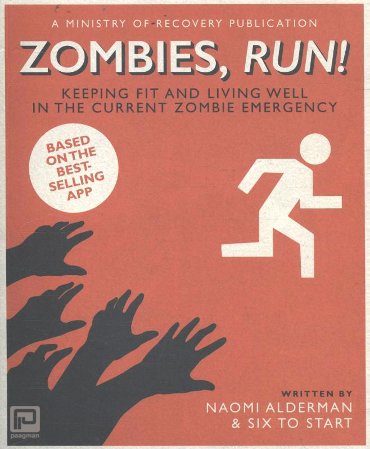 A Guide to Keeping Fit in Body and Mind During the Current Zombie Emergency
It has been three years since the start of the zombie apocalypse and, although we have all lost a lot, we are surviving. Together we will overcome the outbreak but we need every man, women and child to do their bit. This is an informational guide to help you stay fit during the crisis. We can become stronger. We can become fitter. And together we will survive.

As the outbreak progresses contact with zombie hoards are becoming unavoidable. It is vital that you have the ability to outrun the undead and, when necessary, the upper-body power to beat them away. The vital skills of strength, speed and flexibility within the pages of this guide will prove the difference between life and death when the inevitable occurs.

Part fitness guide, part zombie adventure; whether you're new to running, training for a marathon or just want to shed a few pounds, Zombies, Run! is a fun and immersive way to motivate you to get moving.

Founded in 2007, Six to Start is an independent games developer based in London, specialising in story-like games. They've created games and apps for companies like the BBC, Channel 4, and Muse. Zombies, Run! is the world's most successful smartphone fitness game ever, with more than one million copies sold worldwide.

Naomi Alderman is co-creator of Zombies, Run! and an internationally acclaimed writer; her novels include Disobedience, The Lessons and The Liars' Gospel. She's Professor of Creative Writing at Bath Spa University and she's won the Orange Award for New Writers. She was lead writer on long-running alternate reality game Perplex City, has made games for the BBC, writes about games for The Guardian and her Doctor Who novel Borrowed Time was published in 2011.