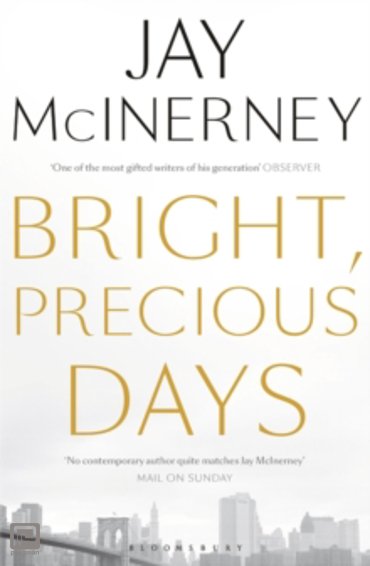 Russell and Corrine Calloway have spent half their lives in the bright lights of New York. Theirs is the generation that flew too close to the sun on wings of cocaine - and whose lives changed irrevocably when planes crashed into the Twin Towers. Now, in 2008, Russell runs his own publishing house and Corrine manages a food redistribution programme.

He clings to their loft and the illusion of downtown bohemia, while she longs to have more space for their twelve-year-old twins. Although they try to forget each other's past indiscretions, when Jeff Pierce's posthumous, autobiographical novel garners a new cult following, the memory of their friend begins to haunt the couple, and their marriage feels increasingly unstable. Not helped by the reappearance of Corrine's former lover, Luke McGavock, whose ardour seems no cooler despite having a beautiful new wife in tow.

Acutely observed and brilliantly told, Bright, Precious Days dissects the moral complexities of relationships, while painting a portrait of New York as Obama and Clinton battle for leadership and the collapse of Lehman Brothers looms. A moving, deeply humane novel about the mistakes we make, persistence in struggle and love's ability to adapt and survive, it confirms McInerney as a great chronicler of our times.