The garden of divine songs and collected poetry of Hryhory Skovoroda 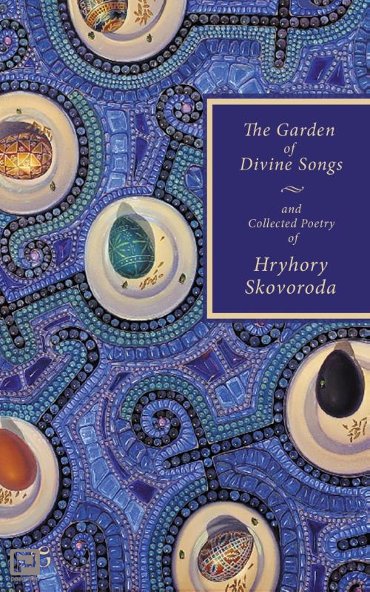 Hryhory Skovoroda is considered by many as the first great Slavic philosopher and poet. Written over a period stretching from the 1750s until 1785, his The Garden of Divine Songs is a unique collection of 30 poems, featuring a complex system of strophic structures and with only a few of the songs written in a traditional way. Skovoroda never repeats one and the same strophic structure; this being the case, his Garden of Divine Songs according to writer-scholar Valery Shevchuk functions as a "practical guide to the art of poetry", exemplifying all the meters and strophic patterns that were possible in Ukrainian poetry of that time. The poet makes masterful use of the accomplishments of academic poetry; the so-called "songs of the world" are the most prominent poems in this collection.

These songs are an expression of Skovoroda's views in poetic form, and many ideas from The Garden of Divine Songs, such as the search for happiness in the world in song 21, would later form the basis for some of Skovoroda's philosophical treatises. Skovoroda's originality, and his ability to approach the most cardinal problems of human existence, stem from his capacity to combine known motifs, borrowed from literary sources such as classical texts, the Bible, and ancient Ukrainian poetic works, with his own system of thinking that focuses on his philosophy of the heart.

The complete poems of Skovoroda are appearing in their entirety here in English for the first time, accompanied by a guest introduction by prominent Ukrainian writer Valery Shevchuk.

Skovoroda was born on December 3, 1722 to a poor Cossack family in the village of Chornukhy in Ukraine, which was then part of the Russian Empire. He studied at the famed Kyiv-Mohyla Academy at various times in his life, but never completed his studies in theology. From 1741-1744 he lived in Moscow and Petersburg, serving in the imperial choir of the Russian Empress Elizabeth I. He spent the period 1745-1750 living in Tokai, Hungary, where he was musical director of a Russian mission.

After returning to Kyiv in 1750, he taught poetics in Pereyaslav. For a large part of 1753-1759 he worked as a tutor for the son of the landowner Stepan Tomara. After that, he taught poetics, syntax, Greek, and ethics at the Kharkiv Collegium for ten years, but left the position after personal attacks on his teachings. After undergoing a spiritual crisis, he decided to devote his life entirely to God and to a life of poverty.

For the rest of his days, he lived the life of a wandering religious hermit, traveling with just a Bible in his knapsack and few other worldly possessions. He stayed with various friends, often giving lessons in exchange for food and lodging. Three days before his death, in 1794, he began digging his own grave and requested that the following epitaph be inscribed on his tombstone: "The world tried to catch me but never could," meaning that the material aspects of earthly life were never able to seduce him.