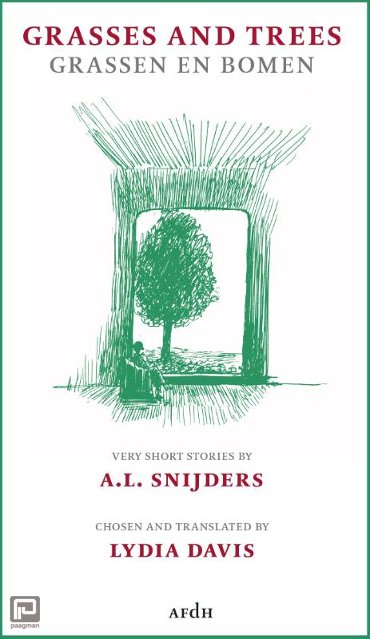 very short stories by A.L. Snijders, chosen and translated by Lydia Davis
Grasses, trees and the lovable grouch of the Lowlands
For many years, no one knew the Dutch writer A.L. Snijders (b. 1937). But in 2001 he started writing zkv's, very short stories. He sent them to his children and some friends, not thinking about publication. Now, fifteen years later, we have about 2,500 zkv's ('zeer korte verhalen'), collected in ten books.
Some of them were translated into German and published (by Reclam Verlag) but English translations were not available. Until-in 2011-the American writer Lydia Davis read some of his stories. Davis, winner of the Man Booker International Prize, is noted for literary works of extreme brevity and is also a short story writer and translator from French and other languages. Among her translations are new versions of the French classics, including Swann's Way by Proust and Madame Bovary by Flaubert. Lydia Davis decided to translate some of Snijders' stories:

I liked the concrete narration and the short sentences, the freshness of each piece, the good humor and the references to Dutch culture and history. I especially liked Snijders' wit, thoughtfulness and often surprising conclusions.
Grasses and Trees brings us 72 very short autobiographical fables about the magical unmagical world of A.L. Snijders, a very Dutch world, imbued with humor and filled with animals, ordinary and extraordinary people, old houses, the city of Amsterdam and the countryside.
Readers of English can now enjoy Snijders' distinct style and his artful blend of observation and imagination. It is to Lydia Davis' credit that with her Snijders translations, people outside the Lowlands can begin to know this lovable grouch and the nation of lovable grouches of which and for which he writes.