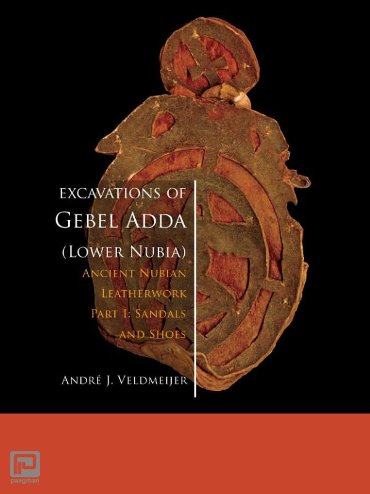 ancient nubian leatherwork. part i. sandals and shoes
The excavations of Gebel Adda (Lower Nubia) by the American Research Center in Egypt's Nubian Expedition (1962-1966, directed by Nicholas B. Millet) yielded large quantities of objects, including an impressive collection of leatherwork. The finds, which show a remarkable degree of preservation, date from the Meroitic Period (about AD 100-400) through the Christian (AD 641-1400) and Islamic Periods (AD 1400), and were mainly recovered from tombs.
The large variety of leather objects, currently housed in the Royal Ontario Museum in Toronto, clearly indicates the high degree of the leatherwork technology of the Nubian people. Among the objects are the famous (post-)Merotic quivers, scabbards, and wrist guards. The present work - the first of two volumes on the leatherwork - however, presents only the footwear (sandals and shoes). It includes detailed descriptions, accompanied by colour photographs and, where necessary, drawings. The preliminary analysis, in which the Gebel Adda material is comprehensively compared with the finds from other sites, discusses topics such as typological development, diachronic change, and geographical variations.
Dr. André J. Veldmeijer, Visiting Research Scholar of the American University in Cairo, has worked as an archaeologist in Egypt since 1995, specializing in, among other things, leatherwork and footwear. He (co-)directs several projects, including the Ancient Egyptian Leatherwork Project, which encompasses the Egyptian Museum Chariot Project and the Tutankhamun's Sticks & Staves Project. He has published extensively, both for scientific and popular audiences.