Don't Try This at Home : A Year in the Life of Dave Navarro 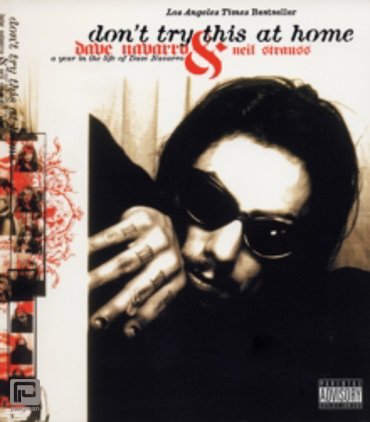 One day, Dave Navarro decided to open the doors of his house in the Hollywood hills to the chaos of the valley below. The only rule was, "You come in the house, you get in the photo booth." The result is a diary, a sociology experiment, a documentary of Hollywood, and an exercise in exhibitionism: strippers, Kurt Loder, Marilyn Manson, pizza delivery boys, Rose McGowan, Keanu Reeves, record executives, Scott Ian, Billy Corgan, hookers, Flea, Billy Zane, drug dealers, Angelyne, Leonardo DiCaprio, the cleaning lady, Leif Garrett, Natalie Imbruglia, and everyone else who came into the house are all caught on film-whether zany, inebriated, naked, hamming it up, looking beautiful, or looking ugly, the photo booth tells no lies. Accompanying the strips are hilarious stories, musings, tell-all anecdotes, and other glimpses into the lifestyle of a one of the most decadent rock stars of our time.

His chronicle of a year in Navarro's life is also a gritty portrait of his descent into drug use and self-destructiveness, and his struggle to find meaning. Designed by the mad genius that produced "Manson's", "Motley Crue's", and "Mankind's books", "Don't Try This at Home" is a visual masterpiece, a celebrity expose, and a shocking, hilarious, and irresistible read.