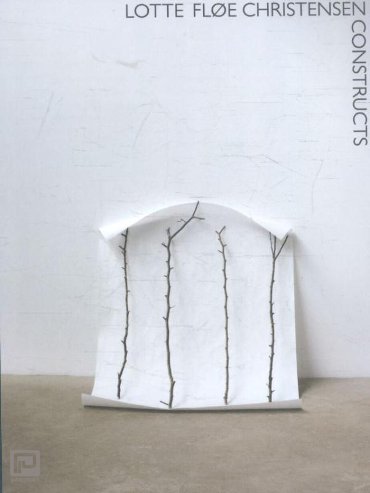 In 2009, Lotte Christensen travelled to the Canadian wilderness. As so often before, venturing into nature, she had her camera with her and was out to make pictures. Among mountains and trees, she found a good spot for an image. She put up the camera, ran into the frame and placed herself with a map between her hands. A 'click' sounded, but not the usual 'clack' of the mirror falling back into place - the camera was out of order. Being far away from civilization with a non-operational camera, the situation all of a sudden felt meaningless. It was the making of images, the exploration and documentation, which was her tool for being in, and dealing with this foreign landscape. To create felt more important than to be.
The act of making images is in itself a way of living life for Danish artist Lotte Christensen. The camera and the act of constructing and making an image is an essential approach to the world in search of an understanding of her on place in it. She works as a visual philosopher with photography and nature to construct images that explore existential issues. She enters the landscape using her self as a measuring tool, gently pulls plants though paper to isolate them from their natural environment or brings back parts of nature to her outdoor studio to build fragile constructions. In line with tradition of representing landscape in art history, in Lotte Christensen's work, nature acts as a projection screen for inner human dilemmas.
Lotte Christensen's work speaks to the imminent human desire for a sense of meaning in existence: Why am I here in this world? As we measure, categorise and examine the world around us in order to understand and define our lives, we end up building an almost tragi-comical connection to the natural world, such as that of the scientist - at once observing and being part of the natural world. In the images and sculptural work of Christensen, this balance between heartfelt, honest attempts of making meaning and the, sometimes humorous, results co-exist is a strange and poetical universe.
Lotte Christensen, b. 1979 in the Danish countryside, is a visual artist now based in Copenhagen,
Denmark. She holds a MFA from School of Photography, Gothenburg, Sweden and a BA in Fine
Art Photography from Glasgow School of Art, Scotland. Her work deals with the relation between
the human mind and the natural surroundings. It has, among other places, been shown in various
venues in Denmark, Sweden, France, Austria, Slovenia, Canada, the U.S., China and Korea. She
has received work grants from the Eric Ericsson Foundation and the Danish Arts Foundation, in
which collection she is also represented.