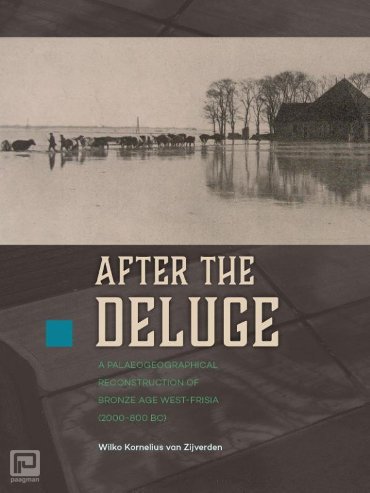 A palaeogeographical reconstruction of Bronze Age West-Frisia (2000-800 BC)
After World War II huge land consolidation projects measuring thousands of hectares were carried out in West-Frisia. Large scale excavations of Bronze Age settlement sites were carried out resulting in a convincing model for the Bronze Age habitation of West-Frisia. This model envisaged settlement sites situated on creek ridges in an open almost treeless landscape. After a sudden change in climate c. 800 cal BC parts of the landscape were inundated, peat bogs developed and West-Frisia was abandoned by man. It was widely believed that this densely inhabited Bronze Age landscape was almost completely destroyed during the land consolidation projects. At the start of this century, however, it turned out that well preserved Bronze Age settlement sites still exist in West-Frisia. These sites were not only well-preserved but also situated at unexpected locations. The excavation results also gave reason to think of the presence of woodlands and forests during the Bronze Age.

This thesis tries to unite the excavation results from the period of land consolidation and those of the later development led projects. In this thesis the palaeogegraphy is described at three scale levels. West-Frisia, the land consolidation project of Westwoud and several settlement sites. Based on an analysis of excavation results and environmental proxy data, a new model for the development of the landscape and habitation of West-Frisia during the Bronze Age emerges. For the construction of the palaeogeographical maps of Westwoud, a new approach is used, based on, amongst others, macro botanical remains. The thesis concludes with an alternative strategy for the prospection of Bronze Age sites in West-Frisia. This thesis is of interest for anyone who is professionally interested in the habitation history of West-Frisia and people who are professionally engaged with palaeogeographical and vegetation reconstructions.

Wilko van Zijverden received his master's degree in Quaternary geology (1991). The subject of the Master's thesis was a reconstruction of the Late Weichselian landscape of the Bommelerwaard in the central river area of the Netherlands. In august 1997 he received his master's degree in ecological archaeology. In august 2011 he was part-time posted at Leiden University for a period of five years in the project "Farmers of the Coast".