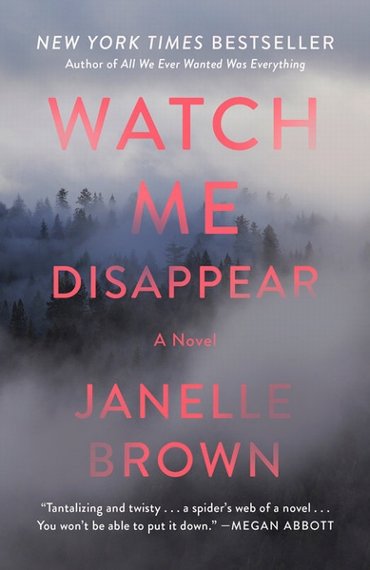 NEW YORK TIMES BESTSELLER • The disappearance of a beautiful, charismatic mother leaves her family to piece together her secrets in this propulsive novel for fans of Big Little Lies—from the bestselling author of All We Ever Wanted Was Everything and the upcoming Pretty Things.

“Watch Me Disappear is just as riveting as Gone Girl.”—San Francisco Chronicle

Who you want people to be makes you blind to who they really are.

It’s been a year since Billie Flanagan—a Berkeley mom with an enviable life—went on a solo hike in Desolation Wilderness and vanished from the trail. Her body was never found, just a shattered cellphone and a solitary hiking boot. Her husband and teenage daughter have been coping with Billie’s death the best they can: Jonathan drinks as he works on a loving memoir about his marriage; Olive grows remote, from both her father and her friends at the all-girls school she attends.

But then Olive starts having strange visions of her mother, still alive. Jonathan worries about Olive’s emotional stability, until he starts unearthing secrets from Billie’s past that bring into question everything he thought he understood about his wife. Who was the woman he knew as Billie Flanagan?

Together, Olive and Jonathan embark on a quest for the truth—about Billie, but also about themselves, learning, in the process, about all the ways that love can distort what we choose to see. Janelle Brown’s insights into the dynamics of intimate relationships will make you question the stories you tell yourself about the people you love, while her nervy storytelling will keep you guessing until the very last page.

Praise for Watch Me Disappear

“Watch Me Disappear is a surprising and compelling read. Like the best novels, it takes the reader somewhere she wouldn’t otherwise allow herself to go. . . . It’s strongest in the places that matter most: in the believability of its characters and the irresistibility of its plot.”—Chicago Tribune

“Janelle Brown’s third family drama delivers an incisive and emotional view of how grief and recovery from loss can seep into each aspect of a person’s life. . . . Brown imbues realism in each character, whose complicated emotions fuel the suspenseful story.”—Associated Press

“When a Berkeley mother vanishes and is declared dead, her daughter is convinced she’s alive in Janelle Brown’s thriller, calling to mind Big Little Lies and Gone Girl.”—Variety