Planning with self‑organised initiatives: from fragmentation to resilience - A+BE Architecture and the Built Environment 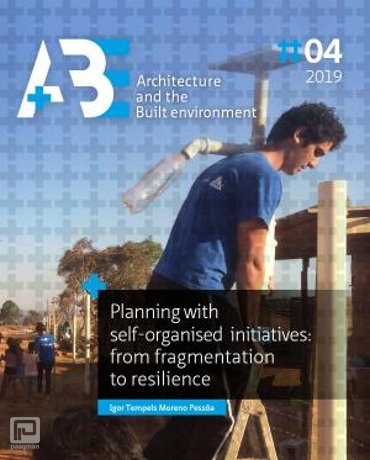 Over the last half century, the Global South has faced a strong rise in the rate of urbanisation. Although this process differs from region to region, rapid urbanisation has created many challenges for countries in the Global South. Brazil is no different. The largest country in South America has jumped from an urban population of 44.67% in 1960 to 84.36% in 2010, according to the Brazilian Institute of Geography and Statistics (IBGE, 2018). While urban growth is relatively stable in Brazil today, the challenges that came with the rapid increase will be felt for many years to come. One of the main challenges was created due to this urban growth not being organised. The main growth in the cities was due to an opportunity-led development, which produced an extremely unequal urban fabric with spatial discontinuities and left-over spaces. Planning institutions have attempted to overcome this spatial fragmentation problem, but have faced many difficulties.
This book demonstrates that spatial fragmentation in Brazilian metropolises is not only related to spatial discontinuities, but also to socioeconomic inequalities. This means that the physical connection between disconnected spaces does not necessarily create social connections between segregated groups. Walls in Brazil are not only physical but also social. This book investigates self-organised initiatives as possible entities to dismantle these invisible walls. Such initiatives help to create social connections between highly diverse groups in the public spaces of cities which have a high level of socioeconomic inequality. The cases of São Paulo, Rio de Janeiro and Brasília reveal a growth in the integration level from functional to symbolic, and even to community level in areas where these self-organised initiatives have been active. This increase in social connection between highly diverse groups has a positive impact on the resilience capacity of the urban system, improving the capacity for closer cooperation in the face of unexpected change.