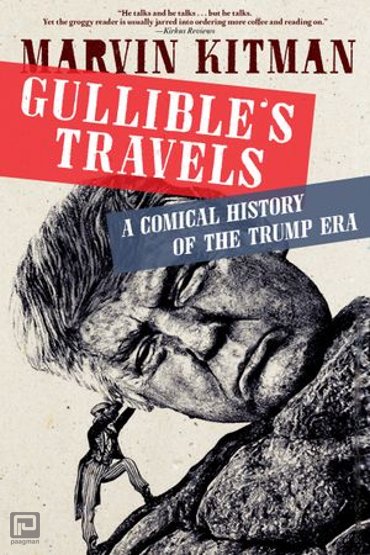 A Comical History of the Trump Era

How to have fun hating Trump

Kitman describes the land of Gulliblesylvania as a democratic country ruled by 34.9 % of the people, "a minority better known as 'the base,' of whom a candidate said he could shoot someone on Fifth Avenue and they would still vote for him." At first Kitman assumed that Trump's candidacy was a publicity stunt. After he realized it was serious, as a satirist he felt very lucky and began to keep a comical journal, modeled after A Journal of the Plague Year which Daniel Defoe described as "Observations of the most remarkable occurrence, which happened in London during the last great visitation in 1665"--which is not to compare the Trump administration to the bubonic plague, Kitman hastens to add. "For one thing, as our POTUS has been telling us, he's made America Great again--AND IT ONLY TOOK A YEAR AND A HALF!" Kitman adds, "And I have never before had such a good time observing and writing about the follies of our country."

Gullibles Travels includes 32 "Trumponicles; the debate over the president's intellectual capacity; "That Russian Thing;" "Who is Agent Orange"; and a CODA that asks the question, "How Will It All End?" Impeachment? 25th Amendment sacking? Resignation? Or reelection?