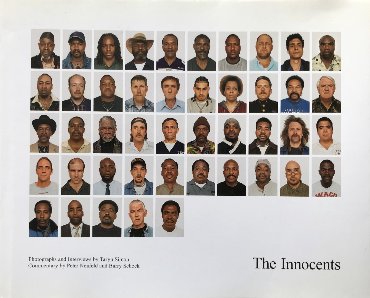 Taryn Simon's earliest body of work, The Innocents (2002), documents the stories of individuals who served time in prison for violent crimes they did not commit. The series centers on the question of photography as credible witness and arbiter of justice, since the primary cause of wrongful conviction is mistaken identification. Suspected perpetrators are identified through photographs and lineups, a procedure that relies on the assumption of precise visual memory. But through exposure to composite sketches, mug shots, Polaroids, and lineups, eyewitness memory can change. In these cases, photography offered the criminal justice system a tool that transformed innocent citizens into criminals. Simon photographed these men at sites that had particular significance to their illegitimate conviction: the scene of misidentification, the scene of arrest, the scene of the crime, or the scene of the alibi. The Innocents was first exhibited at MoMA PS1 in 2003. The 2021 edition of the book includes previously unpublished images, a new essay by Innocence Project cofounders Peter Neufeld and Barry C. Scheck, and an interview by professor and curator Nicole R. Fleetwood with criminal justice reform activist Tyra Patterson.
TARYN SIMON (*1975, New York) is an artist who works in photography, text, sculpture, and performance. Simon's work is in the collections of the Metropolitan Museum of Art, New York; Tate Modern, London; Solomon R. Guggenheim Museum, New York; Centre Pompidou, Paris; Kunstmuseum Lucerne; Neue Nationalgalerie, Berlin; and Los Angeles County Museum of Art and was included in the 56th Venice Biennale (2015). Her honors include the Guggenheim Memorial Foundation Fellowship in Photography and a Photo London Master of Photography award.