Crucible : The Year that Forged Our World 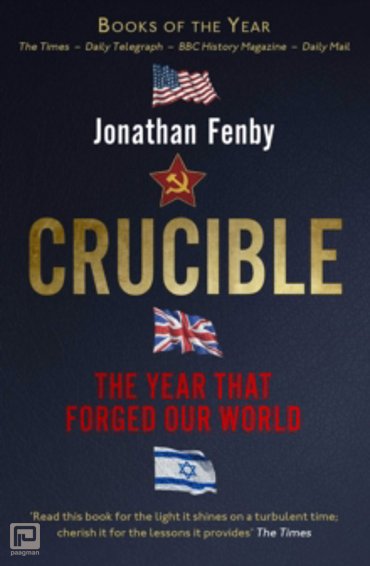 The Times Book of the YearBBC History Magazine Book of the YearDaily Telegraph Book of the Year BOOK OF THE WEEK - The Times `The strength of this book lies in the cold realities it delivers. "The thirteen months of 1947-48," writes Fenby, "provide trenchant examples of how realpolitik can serve a wider purpose if those in power know how to use it." Crucible captures perfectly the urgency of the time...Read this book for the light it shines on a turbulent time; cherish it for the lessons it provides' - Gerard DeGroot 'Looking back 70 years Jonathan Fenby argues convincingly that the period from 1947 to 1948 "really did change the world". His book is an assured gallop across the terrain of contemporary history in this fateful year.

The global devastation of the second world war had smashed longstanding institutions and bankrupted empires, leaving behind the kind of power vacuums that were major openings for change and chaos. Crucible swings from one region to the next in a fast-moving account of how local actors filled those vacuums, often with violence.'Mary Sarote, Financial TimesOne year shaped the world we know today. This is the page-turning story of the pivotal changes which were forged in the space of thirteen months of 1947-48 Two years after the end of the second conflict to engulf the world in twenty years, and the defeat of the Axis forces of Germany, Italy and Japan, this momentous time saw the unrolling of the Cold War between Joseph Stalin's Soviet Russia and the Western powers under the untried leadership of Harry Truman as America came to play a global role for the first time.

The British Empire began its demise with the birth of the Indian and Pakistan republics with the flight of millions and wholesale slaughter as Vietnam, Indonesia and other colonies around the globe vied for freedom. 1948 also marked the creation of the state of Israel, the refugee flight of Palestinians and the first Arab-Israeli war as well as the victories of Communist armies that led to their final triumph in China, the coming of apartheid to South Africa, the division of Korea, major technological change and the rolling out of the welfare state against a backdrop of events that ensured the global order would never be the same again. This dynamic narrative spans the planet with overlapping epic episodes featuring such historic figures as Truman and Marshall, Stalin and Molotov, Attlee and Bevin, De Gaulle and Adenauer, Mao Zedong and Chiang Kai-shek, Nehru and Jinnah, Ben Gurion and the Arab leaders.

Between them, they forged the path to our modern world.