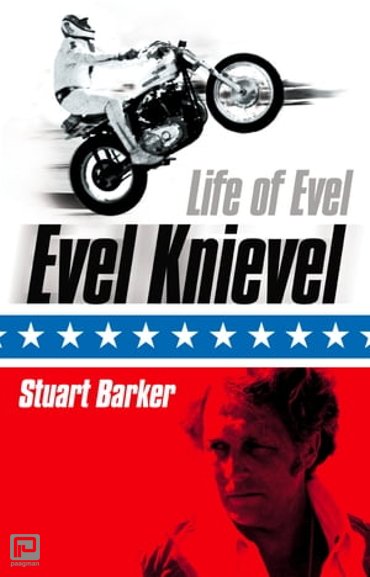 A searching and at times harrowing re-appraisal of the life of Evel Knievel, the seventies American icon and the greatest daredevil motorcyclist that ever lived. The story of the last few years of his life and his death in 2007.

Stuart Barker's definitive biography captures the super-star status that Knievel held and also examines the marketing phenomenon of a man who once boasted he ‘made $60 million and blew $63 million’.

Born in the town of Butte, Montana in 1938, Robert Craig Knievel was an outstanding athlete, ski jumper and ice hockey player at school. His early jobs included working in the copper mines and driving a bus as well as a stint in the US Army, but he always subsidised his income through crime ('I could crack a safe with one hand tied behind my back quicker than you could eat a hamburger with two.')

He used bikes to escape from the police and eventually hit upon the idea of jumping them after seeing a stunt driver jump cars at a state fair. His first jump took place over two mountain lions and a box of rattlesnakes, and he soon developed his act into the 'Evel Knievel Motorcycle Daredevils' before embarking on a solo career.

Knievel suffered 37 breaks and fractures during his daredevil career. In 1967 he spent 29 days in a coma after an attempt to jump over the fountains outside Caesar's Palace casino in Las Vegas. While recovering, he decided to make his goal to jump the Grand Canyon, an attempt he was forced to abort by the US Government; and later was paid $1 million for jumping over 13 double-decker buses at Wembley Stadium.

Now, a quarter of a century after he last stepped off a motorcycle, he has been reborn as the originator of Xtreme sports. This, alongside his love of gambling, women and drinking, ensure his legend will live forever. Life of Evel is the story of a truly extreme personality.