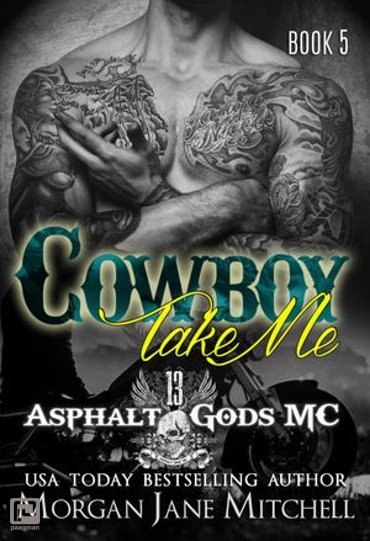 "Halley darlin', name's Cowboy, and I'm taking you away from here." When Cowboy finds Halley outside of the Devil's Den, it's a damned dream come true, but she's not alright, physically and mentally. With all the double-crossing going down within the Asphalt Gods' MC, Cowboy hides Scar's sister away until she's well enough to travel. "I've always wanted a Cowboy to come and take me away." Held captive most her life, Halley's hopes and dreams are framed by the life she's endeared too long. Not to mention, she's carrying the child of a dozen devils. The Sons of Satan MC is all she can remember, when she can remember it at all, and she's all too eager to thank her rescuer. Usually, Cowboy isn't a man to refuse. There's only ever been one woman for Cowboy until now. He's also the only man on Halley's mind until they show up in Tucson, and Snakebite is waiting for her.