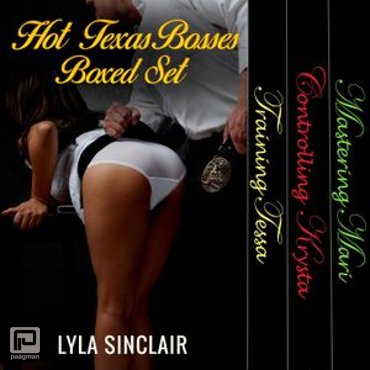 Training Tessa: After her employer goes out of business, Tessa Greer is so desperate for work she leaves Michigan and travels to Houston where jobs seem more available. She's thrilled to land the "Receptionist Plus" position at Maddox Brothers Inc. But Tessa is shocked by the punishments her handsome new bosses dole out for her very minor mistakes. She's even more shocked at how aroused she becomes when they discipline her. And with Dixon Maddox, Tessa finds herself wanting him to take her farther than she's ever gone before.

Controlling Krysta: Grad student Krysta James takes a receptionist job with Maddox Brothers, Inc., but since she's lost her scholarship, she's still not sure how she'll afford to finish her doctorate. She tries to ignore the heat she feels whenever she's near her strange boss Mason Maddox, determined not to allow herself to fall for another selfish rich guy after what happened last time. Dix notices Mason's attraction to Krysta and tells her the heart-wrenching story behind his brother's unusual behavior. Against her better judgment, Krysta signs a contract with Dix to do anything his brother asks of her in return for the money she needs to finish her education. But just as Krysta gets to know Mason and discovers the lovable side he was keeping under wraps, he finds evidence that she's betrayed him. And if she chooses to stay at his ranch, she will be punished.

Mastering Mari: Dr. Chase Maddox never felt a connection to another person like the one he felt with Mari—a girl he met at summer camp when they were teenagers. The innocent afternoon they spent alone together confirmed to him they were soul mates. She left the next day with his phone number, promising to call him soon and to meet him at camp the next year. But he never heard from her. For fifteen years, he's been unable to learn her full name, unable to contact her…unable to forget.
When she walks into his office one day as his new medical supply sales rep, he's elated, sure his soul mate will remember him, even though he's changed drastically since his days as a small, scrawny teenager. When she doesn't know him at all, his mind reverts to dark fantasies in which he controls her, making her bend to his will, teasing and tormenting her body until she realizes no one can bring her pleasure like he can. Then, he'll send her away as revenge for the pain she caused him.
Although Marissa feels an instant connection and is incredibly aroused by Chase's demands, they are stepping way beyond the bounds of professional behavior. Besides, she's sure he's enjoying flaunting his dominance over the new sales rep. She has to stop this before it goes any farther, and the best way is to turn the account over to someone else.

When he suddenly has another new sales rep, Chase is livid at being rejected by Mari again. Until he attends his cousin Mason's 4th of July party, and Krysta "introduces" him to her friend Marissa. Now, all Chase has to do to make his darkest fantasies come true is entice Mari to his own secluded ranch house, right up the road.