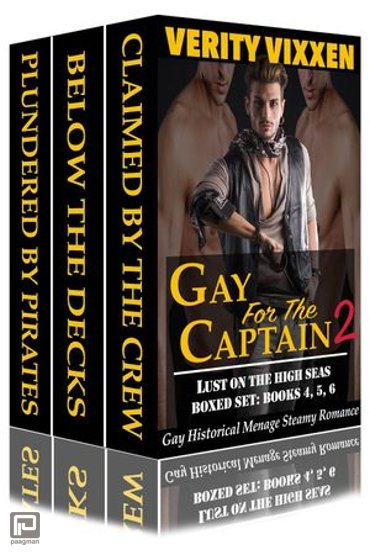 Lust On The High Seas

Praise for Lust on the High Seas

'...amazing, I couldn't help but want to know more, or want to be Will for that matter. '

The gang of insatiable gay seamen are back in this boxed set bundle, featuring over 30,000 words of smutty, debaucherous, adventures on the high seas! Come join Will Sharpe as he is taken by the Captain, his lover and the whole crew hard and without protection!

This series features gay back door encounters, first-time escapades, multiple partners, ménage, voyeurism, autoeroticism, oral, blindfolds and bindings, double entry, three-at-once, and a smattering of romance. Intended for mature audiences. If that doesn’t sound like something that floats your boat, please don’t board the vessel.

Join Will Sharpe as he embarks on another series of delicious gay encounters!

Book 4: Claimed By The Crew

The year is 1789, and Will Sharpe is a cabin boy aboard a trading ship bound for India. While his looming initiation keeps Will's mind occupied, stern Captain Storm intends to ensure that the other offices find Will satisfactory, in more than just his duties aboard the ship! In the meantime, the beautiful blond-haired Jon Dark struggles against his jealousy at all the attention Will is receiving. He wants Will all to himself, and even though he knows Will can't help his attraction to other men he still intends to try and make Will all his.

Book 5: Below The Decks

Will Sharpe, a cabin boy upon a pirate ship, is about to undergo his initiation. He has no idea what it will entail; only that it will involve both pleasure and pain. What pleasures shall Will experience at the hands and members of the crew? Will they be soft or rough? How many men will he have to take before it is over?

While the gorgeous Jon Dark continues to profess his love, cabin boy Will Sharpe is not sure of his true feelings. Will has undergone his initiation and now knows the pleasure of a willing seamen or three. Besides, he likes being the center of attention, and he doubts he could ever give up alpha male Captain Storm's magnificent manhood. He knows he wants the Captain to take him as his submissive, hard and without protection.

Will's relationships will be tested to their limits - in more ways than one.