From Duke Till Dawn - London Underground 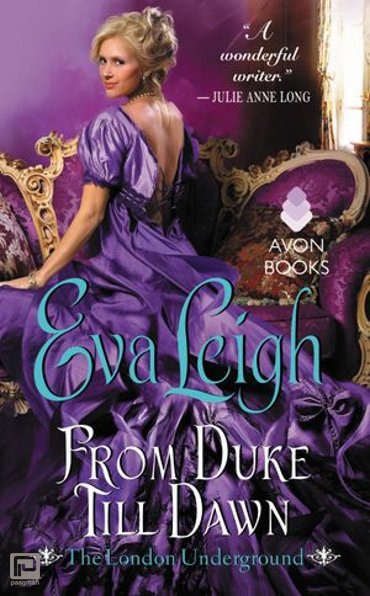 Eva Leigh launches a seductive new series that sizzles with the dark secrets of London’s underworld...

Years ago, the Duke of Greyland gave his heart—and a princely sum of money—to a charming, destitute widow with unparalleled beauty. But after one passionate night, she slipped from his bed and vanished without a trace. And just when he’s given up hope of ever seeing her again, Greyland finds her managing a gaming hell. He’s desperate to have her… until he discovers everything about his long-lost lover was a lie.

In truth, Cassandra Blake grew up on the streets, picking pockets to survive. Greyland was a mark—to be fleeced and forgotten—but her feelings for the duke became all too real. Once he learns of her deception, however, the heat in his eyes turns to ice. When her business partner absconds with the gaming hell proceeds—leaving unsavory investors out for blood—Cassandra must beg the man she betrayed for help.

Greyland wants compensation, too, and he’ll assist her under one condition: she doesn’t leave his sight until her debts are paid. But it’s not long before the real Cassandra—the smart, streetwise criminal—is stealing his heart all over again.