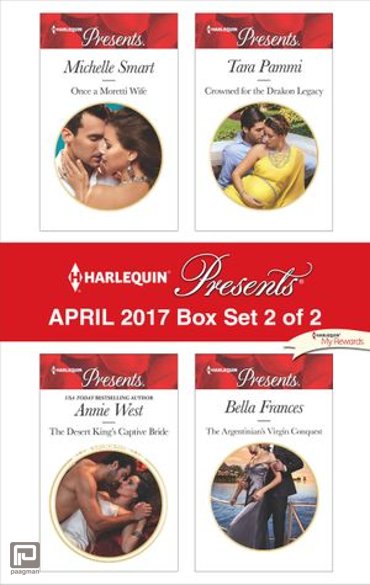 ONCE A MORETTI WIFE
by Michelle Smart
Stefano Moretti wants revenge from his wife, Anna, for leaving him. Her losing all memory of their marriage is his chance… He'll seduce her, then publicly divorce her. But soon there's something he wants more—Anna, back for good!

THE DESERT KING'S CAPTIVE BRIDE
Wedlocked!
by Annie West
Princess Ghizlan is stunned when Sheikh Huseyn seizes her late father's kingdom. Her captor is intent on taming her fierce pride—and making her his own! It won't be long before they fall prey to the firestorm between them—

CROWNED FOR THE DRAKON LEGACY
The Drakon Royals
by Tara Pammi
One night with Mia Rodriguez is all that daredevil Prince Nikandros will allow himself before he faces his royal duty. But when their sizzling liaison leads to an unexpected pregnancy, Nik won't rest until he claims his child—and his princess!

THE ARGENTINIAN'S VIRGIN CONQUEST
Claimed by a Billionaire
by Bella Frances
Lucinda Bond's aloofness hides insecurities so painful that she's never allowed herself to be touched. But Dante Hermida's caressing gaze ignites a desperate desire. It's soon clear Dante longs to claim her…with a need that shows no sign of abating!