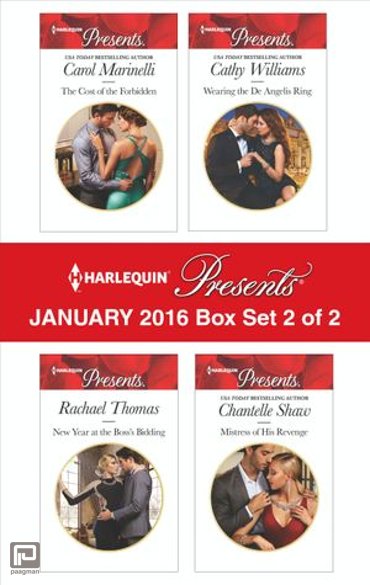 THE COST OF THE FORBIDDEN (Irresistible Russian Tycoons)
byCarol Marinelli
Ruthless Sev Derzhavin is master of getting whatever—and whomever—hewants. Sev has never been refused before. So when his personal assistant Naomi resigns,Sev can't resist the challenge of enticing the beautiful brunette to stay.

NEW YEAR AT THE BOSS'S BIDDING
by Rachael Thomas
Tilly Rogers isthrilled to be offered a prestigious contract for billionaire Xavier Moretti's New Year'sEve party—until she ends up snowbound alone with her boss! The notorious playboy makes ithis resolution to seduce virgin Tilly…

WEARING THE DE ANGELIS RING (The Italian Titans)
by CathyWilliams
Tycoon Theo De Angelis lives by his own rules…until a family debt forceshim into matrimony! Beautiful, inexperienced Alexa Caldini is determined to impose groundrules on their inconvenient arrangement, but how long before Alexa's rules go up in smoke?

MISTRESS OF HIS REVENGE (Bought by the Brazilian)
byChantelle Shaw
Cruz Delgado is the renowned owner of a diamond empire—andaristocratic Sabrina Bancroft is the only woman ever to have walked away from the temptingtycoon. When Cruz sees a chance, he takes his revenge…by making her his mistress!

Be sure to collection Harlequin® Presents' December 2015 Box set 1 of 2!