A Moment in Crime - A Santa Fe Revival Mystery 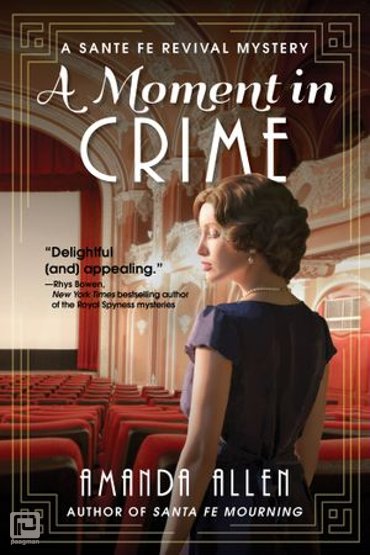 **Fans of Rhys Bowen will be abuzz over Amanda Allen’s second installment in her bold Santa Fe Revival mysteries.

The golden age of cinema is dawning, and Santa Fe is in the grip of movie fever when director Luther Bishop arrives for the filming of his new cowboy flick. Maddie Vaughn-Alwin’s cousin Gwen Astor is in town with a bit part in the movie—but Gwen finds herself caught in a whirlwind of mischief before shooting even begins. But the plot only thickens when the detestable director is found hanging in his office.

When it comes to light that Gwen was having a torrid affair with Luther, she gets pegged as the prime suspect, much to Maddie’s dismay. But Maddie, quick on her feet with ever the keen eye knows that Luther had his fair share of enemies, and there’s no shortage of contenders. Luther’s widowed wife Bridget finally assumes her late husband’s most-coveted director’s chair, head of wardrobe Lorelei Fontaine is bitterly denied a role by Luther she was once promised, and original leading man Harry Kelly was summarily fired by Luther just upon arriving at Santa Fe.

Desperate to prove Gwen’s innocence, Maddie begins an investigation, but every clue reveals another motive—and could point to another murder—in A Moment in Crime, the second engaging whodunit in Amanda Allen’s enchanting Santa Fe Revival mysteries.