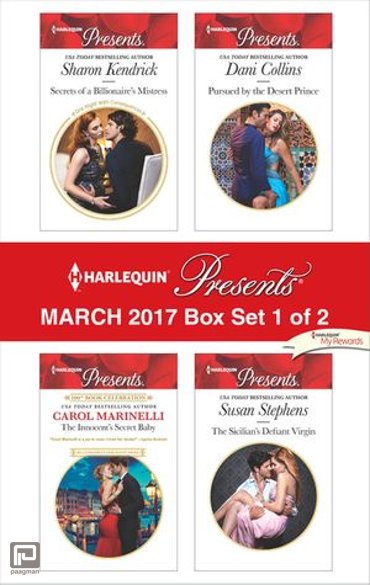 SECRETS OF A BILLIONAIRE'S MISTRESS
One Night With Consequences
by Sharon Kendrick
Waitress Darcy Denton isn't Renzo Sabatini's type. But unworldly Darcy becomes addicted to their passionate nights. And then she discovers she's pregnant! Darcy dare not tell Renzo. But it's only a matter of months before he claims what's his…

PURSUED BY THE DESERT PRINCE
The Sauveterre Siblings
by Dani Collins
When Prince Kasim finds he's falsely accused Angelique Sauveterre of an affair with his future brother-in-law, he can't resist this feisty beauty himself! Angelique blossoms under Kasim's touch and surrenders. But can he give her more than passion and precious jewels?

THE SICILIAN'S DEFIANT VIRGIN
by Susan Stephens
Luca Tebaldi is furious at Jennifer Sanderson for inheriting his brother';s estate—he'll seduce the truth out of her! But this sensual innocent sets Luca's senses on fire, forcing him to confront what she is enticing out of him!