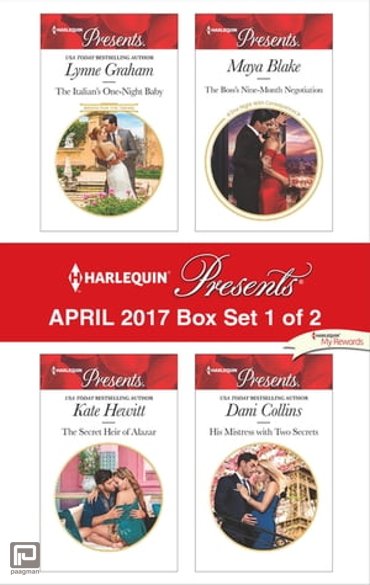 THE ITALIAN'S ONE-NIGHT BABY
Brides for the Taking
by Lynne Graham
Fiery Rio Benedetti hasn't forgotten Ellie Dixon's insulting rejection. Her arrival in Italy reawakens his rage…and a devastating longing! But when the consequences of their abandon are revealed, Rio will have to seduce Ellie all the way to the altar

THE SECRET HEIR OF ALAZAR
Seduced by a Sheikh
by Kate Hewitt
Gracie Jones spends one forbidden night with Malik al Bahjat—but he's called to his duty as heir to the throne of Alazar before she discovers her pregnancy. When Malik learns the truth, he's intent on crowning Gracie his desert queen!

THE BOSS'S NINE-MONTH NEGOTIATION
One Night With Consequences
by Maya Blake
An accident leaves Sienna Newman with no memory of breaking up with Emiliano Castillo—only of their blissful nights! They're both shocked by her pregnancy—but it's a race against time before Sienna's memories return. Can Emiliano's seduction keep her in his bed?

HIS MISTRESS WITH TWO SECRETS
The Sauveterre Siblings
by Dani Collins
After her fling with Henri Sauveterre ends, Cinnia Whitley discovers she's carrying twins! Dare she keep it a secret? Henri is furious at Cinnia's deception—but any Sauveterre deserves his protection. Can Henri prove how pleasurable their reunion will be?