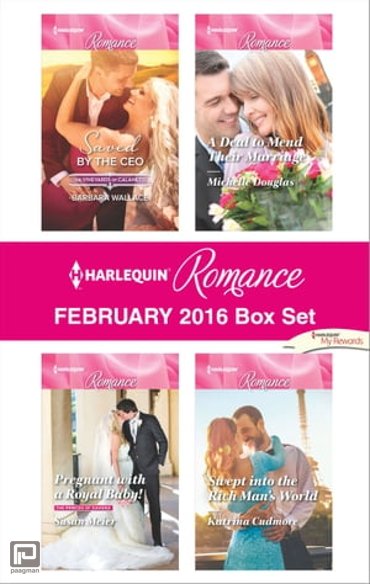 SAVED BY THE CEO (The Vineyards of Calanetti)
Barbara Wallace
In need of peace and quiet, Louisa Harrison has escaped to Tuscany. But gorgeous local tycoon Nico sends her heart into overdrive…especially when he kisses her! In Nico’s arms she feels stronger than she’s ever felt before, but is she brave enough to entrust him with her justhealed heart?

PREGNANT WITH A ROYAL BABY! (The Princes of Xaviera)
Susan Meier
One spontaneous night with Prince Dominic has dramatic repercussions for Ginny Jones—she’s now carrying the next heir of Xaviera! A marriage of convenience is Ginny’s worst nightmare, so as they jet off on their honeymoon, Dominic must prove he is a daddy—and loving husband—in the making!

A DEAL TO MEND THEIR MARRIAGE Michelle Douglas
After five years apart, Jack Pearce returns to divorce his beautiful wife, Caroline, but their chemistry is as strong as ever! When Caroline needs Jack’s help to save her professional reputation, working together could just save her job and their marriage…

SWEPT INTO THE RICH MAN'S WORLD Katrina Cudmore
After a business partnership turned relationship turned disaster, Aideen has sworn off romance. But when billionairenextdoor Patrick Fitzsimon whisks her away to Paris on a mission to save her business, she finds herself torn between her head, which tells her to stay away, and her heart, which begs to be drawn closer…

Look for 4 compelling new stories every month from Harlequin® Romance!