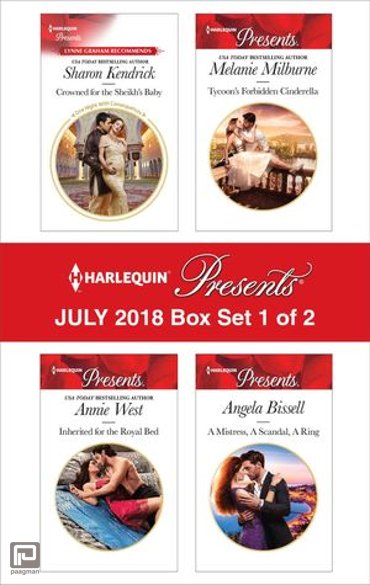 Crowned for the Sheikh's BabyInherited for the Royal BedTycoon's Forbidden CinderellaA Mistress, A Scandal, A Ring

CROWNED FOR THE SHEIKH’S BABY

One Night With Consequences

**INHERITED FOR THE ROYAL BED

After liberating inherited concubine Lina, powerful ruler Sayid is shocked by her transformation from naive to irresistible! Sayid’s never wanted anyone more but can only offer a brief affair. Will Lina accept a week in his bed?

Lucien refuses to indulge in love, but delectable Audrey tests his control! Her shy innocence holds an enticing appeal. When scandal forces them together, Lucien proposes a temporary solution to their cravings—delicious surrender!

A MISTRESS, A SCANDAL, A RING

For Xavier, seducing stunning Jordan is a calculated risk. He’s convinced their fire will soon burn out. But when their affair’s exposed, there’s just one option—bind Jordan to him permanently!

Join HarlequinMyRewards.com to earn FREE books and more. Earn points for all your Harlequin purchases from wherever you shop.