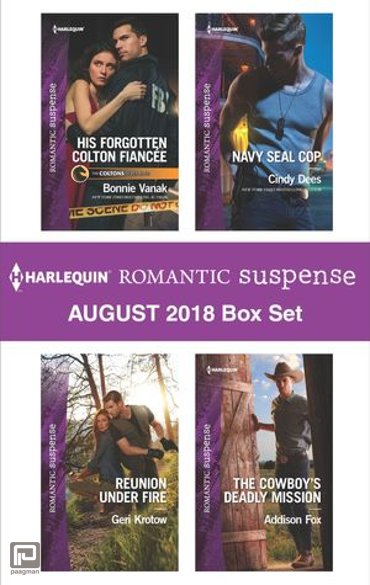 Looking for heart-racing romance and breathless suspense? Want stories filled with life-and-death situations that cause sparks to fly between adventurous, strong women and brave, powerful men?

Harlequin® Romantic Suspense brings you all that and more with four new full-length titles in one collection!

The Coltons of Red Ridge

After suffering amnesia from an explosion, Quinn Colton has no memory of West Brand, the handsome FBI agent she agreed to marry, or of the killer she saw running from the crime scene. Now West must protect her from the person who will do anything to keep her from remembering what happened…

When police psychologist Annie Fiero returned home to run her grandmother’s yarn shop, she never thought she’d get pulled into a case involving the Russian mob, let alone reunite with her high school sweetheart, Silver Valley detective Joshua Avery. Will they be able to survive the mob long enough to figure out they’re still in love?

Carrie Price’s ghost-hunting TV personality boss has been kidnapped—on camera. Now it’s up to her and New Orleans cop/Naval Reserve SEAL Bastien LeBlanc to find him. Will Carrie dare reveal her own violent past and trust Bastien when that past comes calling for her? Or will she lose everything…including him?

When a serial killer’s crimes come to light, detective Belle Granger knows she must stop him. But as she gets closer to the killer—and her ex, Tate Reynolds—all of Tate’s fears from ten years ago surge to the surface and threaten their love once again.