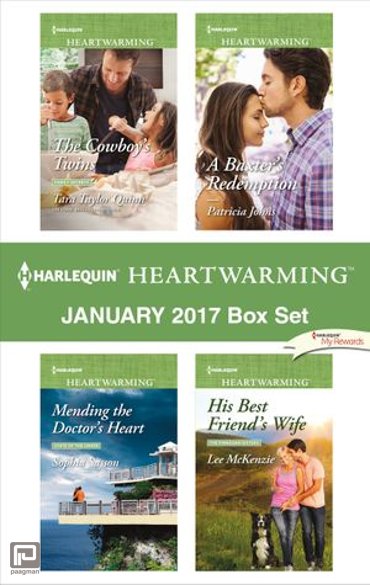 The Western segment of the Family Secrets cooking competition show is great for ratings. But as producer Natasha Stevens gets closer to her handsome cowboy cohost, Spencer Longfellow—and his adorable kids—she’s faced with a decision. One that has nothing to do with business.

Dr. Anna Atao has treated patients in some of the most dangerous and remote places on earth. There’s no disaster she can’t handle. Except the one that tore her life apart five years ago. Now a tsunami on the tiny island of Guam has forced her to return to the site of her personal tragedy…and the man she left there when her world fell apart.

A BAXTER’S REDEMPTION
by Patricia Johns

She was once the belle of Haggerston, Montana. Wealthy and beautiful, Isabelle Baxter never thought about the people she stepped on. Now she’s back, claiming she’s changed. James Hunter refuses to trust this new and improved Isabelle. No matter how much she draws him in…

HIS BEST FRIEND’S WIFE
The Finnegan Sisters
by Lee McKenzie

Paul Woodward has only ever loved one woman: Annie Finnegan. He stayed away because she was married to his best friend. Now the widow and single mom is busy looking after a big family, and Paul doesn’t want to be just her friend anymore. But if he pushes for more he risks losing everything.