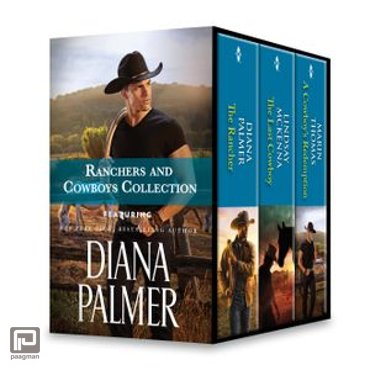 The Rancher by Diana Palmer

Cort Brannt, the heir to the Skylance Ranch empire, has women gallop into his life, but the handsome lone wolf sends them just as quickly on their way…until a pretty, vivacious neighbor appears on the range. Has the most eligible bachelor in Branntville, Texas met his match?

The Last Cowboy by Lindsay McKenna

City girl. It was written all over her like a sign warning him to keep off. Sure, Slade McPherson would train her horse…With his ranch close to foreclosure, he can't afford to turn away a paying customer. But no way is this cowboy getting involved with a woman like Jordana Lawton—no matter how pretty she looks in a saddle. Yet everything can change in an instant. A terrifying run-in with an angry bull leaves him wounded and unable to compete in a race that could change his future. With Jordana by his side, he might stand a chance. But what happens when this old-school cowboy finds himself falling for a modern city girl?

A Cowboy's Redemption by Marin Thomas

Cruz Rivera is on his last chance. He can't afford to blow it by falling for the beautiful blonde who just hired him to fix up her family's New Mexico property. If he's going to get back on the rodeo circuit, Cruz needs to focus. Besides, a sweet single mom like Sara Mendez can do better than someone with Cruz's troubled past.ÿSara isn't making it easy for Cruz to keep his distance. He's a man of many secrets, but Sarah sees only good in his heart. Though Cruz knows he should move on before Sara discovers the truth about his past, he can't leave the closest thing to a home he's ever known. Cruz is the only man Sara wants—can he become the one she deserves?