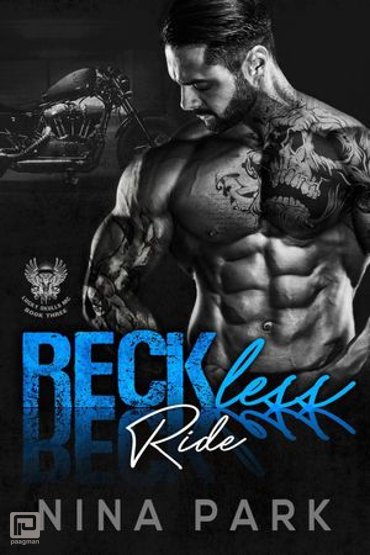 This is book 3 and the finale of the Lucky Skulls MC series!

Fate put her in my arms. Then I put her on her knees.

She brought me back from death's door.

In return, I brought her body to the brink of shattering – over and over again.

But our frozen paradise becomes an icy hell when my enemies discover I've survived their assault.

And they're coming to finish the job.

I would have died without her.

Lying in a freezing, barren ditch on the side of the road, I felt the life slipping from my body.

Warmth, feeling, thought – all was gone by the time she arrived.

And when I looked into those sapphire eyes, I thought I was seeing an angel.

But the patient nurse brings me back to life.

All the things that I thought I lost came roaring back with a vengeance.

Rage, for the men who tried to kill me and failed.

Pride, knowing that I am not a man easily put to death.

And lust – hot, burning lust – for the innocent girl locked in this cabin with me.

A swirling blizzard has us trapped for days.

As long as we're stuck here, I've got big plans for my savior.

For her luscious lips, her untouched curves, for the warmth emanating between her legs.

The only sound I want to hear is her moaning.

But news of my survival manages to travel beyond the walls of our little cabin oasis.

The men who ordered the hit are determined to put me down for good.

And this time, they know how to hit me where it really hurts.

When they kidnap Elle, I know what I have to do, the one thing I do best.

Take my gun in my hands and get ready to kill for what I love.

My woman is coming back to me.

No matter who I have to slaughter to get her.

Maybe saving him was a mistake.

That's all I can think as I scream and struggle against the crushing hands of the men who are taking me.

They're used to violence, these men.

Used to hurting and abusing women.

My screams are music to their sick, twisted ears.

Maybe I should just submit to their torture.

Would that make it go faster?

But I know that, no matter what happens next, Ciaran was worth it.

The touch of his hands on my skin was a sensation worth dying for.

And the heat of his love is worth fighting to feel again.

I make up my mind: I won't give in easily to these evil SOB's.

I'll make them sweat to keep me quiet.

Because my hero is coming for me.

With fire and fury, Ciaran will kick down the door and kill any man who lays a finger on me.

Deep in my heart, I know that's true.

I just have to hope he makes it in time.