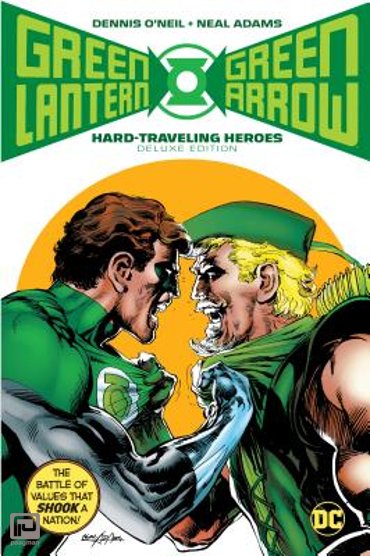 Hard Travelin' Heroes
"Over 40 years ago, writer Dennis O'Neil and artist Neal Adams raised the expectations for and expanded the idea of what could be accomplished with mainstream commercial comics. Now, presented in a beautiful, oversize edition, with an introduction by Dennis O'Neil himself, Green Lantern/Green Arrow: Hard Travelin' Heroes Deluxe Edition , the relevance of those stories can still be felt. What does it take to be a superhero? Where should a superhero stand in society? What is important to a superhero? Theseare all questions Green Arrow aims to teach Green Lantern by forcing the space cop out of the stars and onto the ground where real issues are festering. Together, these hard-traveling heroes traverse across America, and a few alien landscapes, to understand how the world is not black and white. Poverty, corruption, pollution, racism and drug addiction are only some of the issues the emerald warriors face. Collecting Green Lantern #76-87 and #89 and the backup stories from The Flash #217-219 and #226"-