The Maverick and His Machine 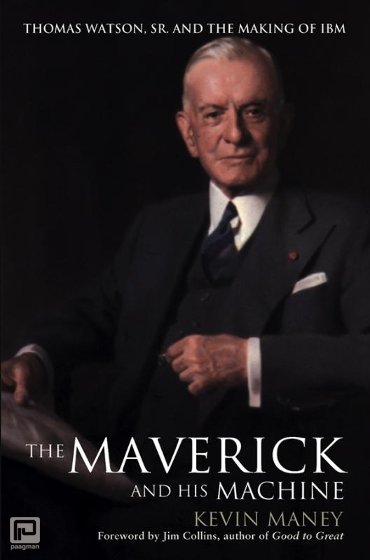 Thomas Watson, Sr. and the Making of IBM
"At just the right moment when we most need it, Maney brings us a penetrating picture of one of the most important figures of the twentieth century, a man whose life teaches us about resiliencyindividual and institutionaland much about what we need to recreate greatness in our own future."
From the Foreword by Jim Collins

IBM is one of the most successful companies in American history; it ushered in the Information Age and dominated the information industry for more than seventy years. Yet the builder of IBM has never been thoroughly examined and brought to life. Now, award winning journalist Kevin Maney, using thousands of documents never before made public, reveals the lasting achievement of the man who forever changed the world of business.

Watson was the rare businessman who transcended business. His fame and power echoes that of Microsofts Bill Gates today and Standard Oils John D. Rockefeller in an earlier age. Watson, in fact, created the role of the celebrity CEO. On a grander scale, Watson invented the modern concept of the corporate culture, and proved its power to make a company great.

Watsons story plays out on a global stage, intersecting with the major events and people of his time. A business failure as a young man, he rocketed to the top levels of National Cash Register before a federal antitrust trial nearly brought down NCR and seemingly crushed his career. The moment forever shaped Watsons business sensibilities and drove him to reinvent the American corporation. In 1914, he took charge of a struggling little entity called the Computer Tabulating Recording Company, infused it with his values, his competitive drive, and his personality quirks, and transformed it into International Business MachinesIBM.

Over and over, Watson made daring bets and won, each time vaulting IBM to a new level of size and power. In the 1920s, when information wasnt obviously going to become a big industry, he bet IBMs future on tabulating machinesthe mechanical forerunners to computers.

In the Depression of the 1930s, Watson pumped money into R&D and kept factories running while most companies slashed budgets and jobs. When Franklin Roosevelts New Deal created massive information demands, IBM was ready to fill them. The companys growth exploded, and Watson became the highest paid American.

In his later years, Watsons life took a Shakespearean turn. He struggled with his son for power, and stayed on at IBM into his eighties, endangering the empire hed built. He became entangled in controversy by accepting a medal from Nazi Germany, a mistake that haunts his legacy today. In the late 1940s, Watson and Thomas Watson, Jr. guided IBM through the torturous transition from mechanical technology to electronic computers.

With exceptional detail that takes the reader inside business meetings in Watsons office and into his relationships with presidents, business leaders, employees, and family members, Maney tracks Watsons rise from obscure cash register salesman to household name. Maney examines the profound impact Watson had on modern companies, the business lessons learned, and the personal motivations that spurred Watsons frantic energy and inexhaustible drive for success. The Maverick and His Machine for the first time reveals the true character of the man whose visionary leadership laid the foundation for the computer revolution.