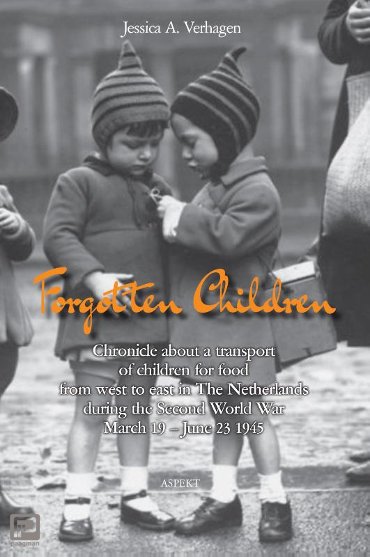 Chronicle about a transport of children for food from west to east in the Netherlands during the Second World War March 19 – June 23 1945
On a cold Monday morning in March 1945, just after the hunger winter, children and their parents gathered on a dock in Waddinxveen. The malnourished children are leaving on a boat to Drenthe, where there still is food. They don’t know how long they will be away or where they are heading. But they trust the minister and they the need for food is high. The children have become refugees of war in their own country.
In 2016 the author and grandchild of minister Warmenhoven found his travelogue from 1945. In this journal he described the journey of these children, himself being the leader of this operation. This book entails the reconstruction of this journey and is told from the perspective of the children who took part in this journey. The memories of these ‘children’ are gripping, personal and give the reader a picture of what it was like to be starving, during wartime.
This book also retells the stories of those heroes who organised and executed these transportations of children, and of those welcomed the children in their own families and homes.
It is the first time a journey such as this, the personal stories of the children, together with the travelogue and original photographs, is recorded. That makes this book unique. It is of relevance even now, because there are so many children who come from a past riddled with war who seek asylum. This book offers an insight in this emotional part of Dutch history, this nation had almost forgotten.

The author, drs. Jessica A.
Verhagen, is a psychologist, criminologist, profiler and accident-investigator. She works as lead-lecturer Cold Case at Mandeville Academy Gouda. This is her first book. This book has also been filmed in 2020, the title of the film is also Forgotten Children.