A Text Worthy of Plotinus - Ancient and Medieval Philosophy - Series 1 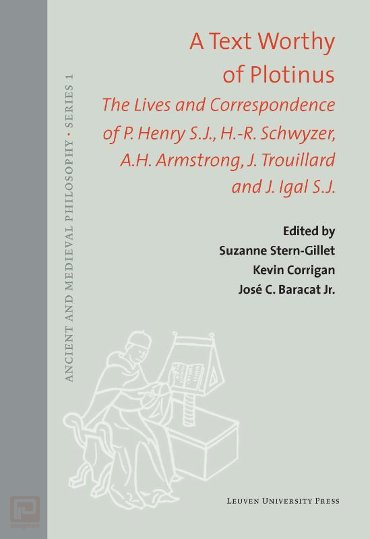 The Lives and Correspondence of P. Henry S.J., H.-R. Schwyzer, A.H. Armstrong, J. Trouillard and J. Igal S.J.
A Text Worthy of Plotinus makes available for the first time information on the collaborative work that went into the completion of the first reliable edition of Plotinus’ Enneads: Plotini Opera, editio maior, three volumes (Brussels, Paris, and Leiden, 1951-1973), followed by the editio minor, three volumes (Oxford, 1964-1983). Pride of place is given to the correspondence of the editors, Paul Henry S.J. and Hans-Rudolf Schwyzer, with other prominent scholars of late antiquity, amongst whom are E.R. Dodds, B.S. Page, A.H. Armstrong, and J. Igal S.J. Also included in the volume are related documents consisting in personal memoirs, course handouts and extensive biographical notices of the two editors as well as of those other scholars who contributed to fostering the revival of Plotinus in the latter half of the 20th century. Taken together, letters and documents let the reader into the problems – codicological, exegetical, and philosophical – that are involved in the interpretation of medieval manuscripts and their transcription for modern readers. Additional insights are provided into the nature of collaborative work involving scholars from different countries and traditions.
A Text Worthy of Plotinus will prove a crucial archive for generations of scholars. Those interested in the philosophy of Plotinus will find it a fount of information on his style, manner of exposition, and handling of sources. The volume will also appeal to readers interested in broader trends in 20th century scholarship in the fields of Classics, History of Ideas, Theology, and Religion.