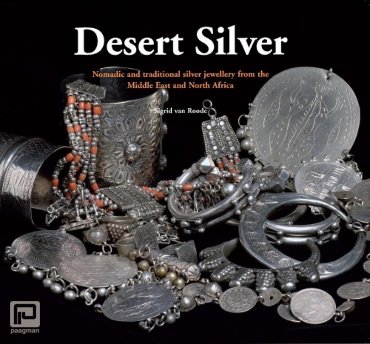 nomadic and traditional silver jewellery from the Middle East and North Africa
Some of the oldest civilizations in the world originated along the fertile banks of the Nile, Tigris and Euphrates rivers, and the countries of the Middle East and North Africa have been cultural melting pots ever since. The trade routes adopted by the regions nomads linked colourful cultures and time-long traditions like so many beads on a string. And indeed it is in the regions jewellery that its many-layered history of tribes and empires, nomads and villagers is perhaps best seen. From an archaeological point of view,
decorative details and motifs can be traced back centuries, sometimes
even millennia. This book, Desert Silver, explores the social, economic and
religious background of this jewellery.
The traditional silver jewellery of the region combines a variety of aspects of desert life. As the unalienable property of a woman, it has practical, economic value; it serves as a social indicator and reveals where the wearer comes from, how rich she is and her status as a wife and mother. Perhaps more
importantly it is frequently worn as a powerful amulet.
Jewellery plays a subtle role in everyday society as communicator, messenger
and bank account, and all of these aspects are discussed in the book and
illustrated with rich examples, from Palestinian wedding necklaces made
from fragrant cloves to the brightly enamelled bracelets of the Maghreb.
The different functions fulfilled by jewellery are rooted deep within society, so changes within that society inevitably impact its jewellery. Now that traditional societies are changing fast, what does the future hold for the traditional silver jewellery of the Middle East and North Africa, jewellery that has remained unchanged for centuries?

In the Dutch National Museum of Antiquities (Rijksmuseum van Oudheden, Leiden) jewellery from the Bedouin people from the Middle East and North Africa is shown on the exhibition 'Charming: Bedouin jewellery and veils'. (16 October 2010 - 13 March 2011).